The German government will deal with the first aid package for flood victims. But it is still unclear what devastation the rain and flood have caused. The first details are dizzying.

There are houses in the Ahr or Eiffel that are completely gone. They were taken away from the water. Little by little it is being seen how many of these houses have disappeared and how many still exist are being completely destroyed. And what the houses have inside. In a place called Ahrweiler, floodwaters swept away tables, chairs, cupboards floating in the streets, hotel equipment that ended up in the mud.

Hundreds of buildings have been demolished, says the district administrator in Ahrweiler. Not everyone has done home insurance. “A lot of people here have lost everything,” says Jürgen Pföhler. But what is the value of all this? C

Across the factory it is easy to extract values ​​in figures. In Bad Neuenahr in the state of Rhineland-Palatinate is located a factory of ZF vehicle supplier. It employs 280 people. Production has been suspended for months. The production and storage halls were flooded by the flood. The water in the factory reached the level of 2 meters, according to ZF. 12 cars and a camping truck were swept away by the water, the premises were destroyed, the floor was covered by a thick layer of clay.

Meanwhile, other information is disclosed about the firms and the losses they have had. The Factory-Outlet-Center shopping complex in Bad Münstereifel with 50 shops has practically disappeared, reporters say. The Dorint Hotel in Bad Neuenahr: “completely destroyed,” says manager Jörg T. Böckeler. The water reached the second floor. In Leverkusen, the clinic with 2500 employees was closed due to major damage to the electricity supply.

The first in infrastructure are roads and trains. According to the first assessments of the situation, announced the German railway company, Deutsche Bahn shows that: Railways in the region have been severely damaged over a distance of 600 kilometers. These include rails, signal technique, bridges, signal boxes. At 80 stations and stops there is damage from water, mud and sludge. At least 20 locomotives and trains have been out of use for several months.

In the Ahr Valley, regional trains are currently not available. Seven railway bridges and 20 of the 29 kilometers of rails in the Valley have been destroyed, says the regional train company. The Eiffel segment from Trier to Cologne is completely blocked.

Destroyed roads and collapsed bridges will block traffic for a long time. Despite the fact that in many places the roads have been cleared of mud and rubble. 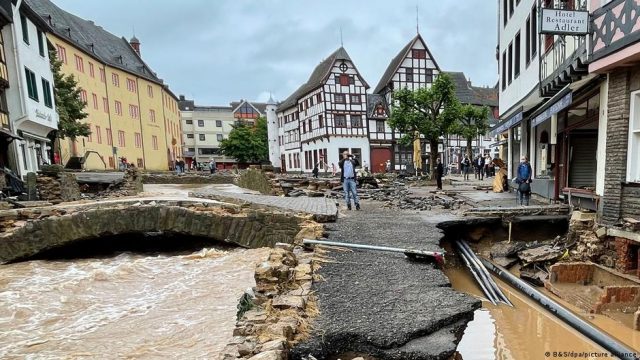 Many repairs take time. The supplier of the Mittelrhein network, warned that the gas supply in the district of Ahrweiler (Ahrweiler), takes months to put into operation. “The gas pipes have been completely destroyed,” said Marcelo Peerenboom, a spokesman for the firm. Several kilometers of pipelines have to be re-established. “It will take weeks or months. Which means that citizens will have cold water and cold apartments even when the winter season comes. ”
In flooded areas, cell phones or landlines did not work for days. The water took away mobile phone stations and landline distribution boxes. Deutsche Telekom and Vodafone set up mobile antenna stations and replacement parts with heavy conveyors over the weekend in Eifel, costs for which have not yet been announced.

Accounts are being made everywhere. Insurance companies will give the first estimates in the middle of the week. In the ministry of transport a working group has gathered to talk about repairing broken bridges, rails, roads and antennas. For the Deutschen Bahn railway company and for the roads alone, the Federation must provide at least 2 billion euros, according to government districts. Finance Minister Olaf Scholz spoke of a “demonstration of national strength”, which should now be followed by immediate assistance of 400 million euros. They should be available as early as July.

“After the floods in Elbe in 2002, it took three years to repair major damage, and five years until the flooded areas started to look okay again,” said Reinhardt Quast, president of the Central Association of German Builders.

The floods of 2002 and 2013 have always been used as benchmarks to make disaster assessments. Following immediate assistance, the Federation and the Lands made available eight billion euros at the time. But the current crisis surpasses those of the previous ones. The number of people who have lost their lives makes this clear: 164 dead in the disaster area. This figure will not remain so, because other victims have not been found yet. Rescue forces are still searching for the missing./DW