The money supply in lek is growing at a slower pace in the first half of this year, signaling perhaps a gradual normalization in the process of emerging from the pandemic.

Data from the Bank of Albania show that the monetary aggregate M2, which represents the money supply in local currency at the end of May, was growing at an annual rate of 9.9%.

In the lek distribution structure by way of holding, however, what stands out is that the more liquid components continue to grow at higher than average rates. Current accounts and demand deposits in lek at the end of May had the highest growth rate, with 19.7%; however, even here the growth rate is slower compared to the end of last year, when it reached the level of 25.9%. 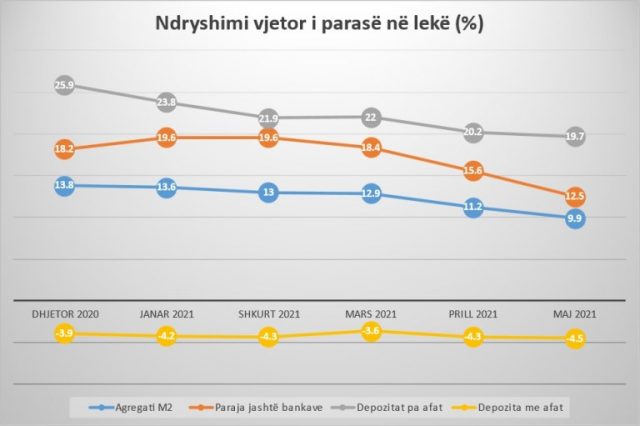 Money outside banks also continues to grow at double-digit rates, by 12.5% ​​compared to a year ago. However, even here the growth is slower compared to the end of last year, when it marked the level of 18.2%.

Lek time deposits are the only component of the lek supply that remains declining, but this is a trend that has been going on for years and is related more to very low interest rates than to the effects of the pandemic. At the end of May, the annual decline in time deposits was 4.5%, while at the end of last year the decline had been 3.9%. As deposit interest rates remain at historically low levels, depositors generally do not have much incentive to close money on time deposits and prefer to keep them in accounts available for withdrawal at all times.

The depreciation of the euro at the lek exchange rate during the first half of this year also shows an increasing supply of European currency in the domestic foreign exchange market. This is confirmed in its formalized component, the one deposited with commercial banks./ Monitor