The “Highlands” association is formed in California, USA

A group of highland immigrants living in California, USA, have formed the “Highlands” association.

The number of our expatriates in the state of California is relatively small, but they are an organized community and have contributed to every need that the homeland had, but they will now have even better opportunities to act, as they will act as a subject. united in a formal association.

The decision to establish the association “Malësia” in California was taken at the first meeting of the association on 26.06.2021, in which case the 20 members of the Coordinating Council were elected. 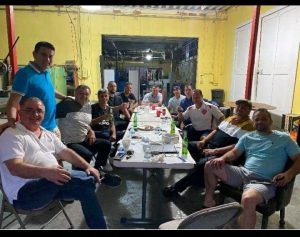 “Malësia Association will have the status of a non-profit organization (Non-Profit) and will deal with humanitarian issues, preservation and cultivation of our culture, history and traditions in the diaspora,” the mayor told Malesia.org. Enver-Vero Gjokaj.

The association will not deal with political, religious or various interest groups.

This “non-profit” association will not deal with political issues, nor with religious ideologies, nor with regional geopolitics (strictly prohibited by the US), nor with various “Interest Groups”. We do not even have a motive to support different groups or individuals in their personal agendas (for personal gain). This is defined by the American Law “No Political Affiliations” & “No Lobbying”. We are ready to help the homeland materially, in cultural, educational and humanitarian activities “, says Gjokaj.

The association has already started to prepare some initiatives and plans that will be on the agenda of the association.

“In the last meeting, we have already defined the vision of the association and some initial plans. There were some very interesting ideas and proposals, and they were considered for the future. As a start, the focus of this association will be some small projects. Every beginning has difficulty “Growing Pains”. The documents for the non-Profit status of the association we submitted last week, they go through a process very corrected by the state of California and the American Federation, and it will take 3-4 months to finalize this process. After their approval, then we gain the right and create the fund of the association.
I am confident that this association will be successful, long lasting and charitable. Promoting feelings for our sacred homeland, our undeniable generosity and bravery that our ancestors have shown for centuries “, said for Malesia.org, Enver-Vero Gjokaj, president of the Malësia association in California.