The works in the new sanitary field of waste are completed

Today, Prime Minister Edi Rama inspected some of the important investments in the city of Berat.

In this Municipality, the new sanitary field of urban waste has just been completed. This investment enables this Municipality to deposit waste with European environmental standards. A strategic investment, according to Mayor Ervin Demo, that finally closes the decades-old scourge of garbage collection.

“Due to one of the biggest problems we have had in the Municipality of Berat, this investment already meets most of the standards. We have managed to encapsulate all the 20-year-old waste at the end of the landfill, which have been deposited at the end and we already have a landfill that at least for the next 5 years covers all the needs of the Municipality of Berat “, – said the mayor of Berat, Ervin Demo.

The investment includes not only the rehabilitation of the landfill which was about 4 hectares, but also the construction of river protection, as the landfill was very close to the Osum River, which during the winter increased the level and took some of the waste with it.

In Berat, the new road of the Castle is nearing completion, which will meet every need of tourists who visit the Castle of Berat and especially during the summer season are numerous in number, both foreign and local.

“About 90% of the works have been completed. The road itself meets all the standards and has the right width, two tourist buses can be exchanged with each other without any kind of problem. The road continues and goes to the monastery, which in itself has become an attraction. “Apart from laying down, all the walls have been rehabilitated within the tradition of stone work that we have in the city.” – said the mayor of Berat.

The road not only facilitates the movement of tourists to the Castle, but also increases the value of the property for the residents living along it, who are turning their homes into small guest inns.

Prime Minister Rama demanded that maximum care be taken for each element until the end of the last meter, so that everything is uniform and aesthetically harmonized.

Another investment in the city is the new parking lot, which will complete the tourist offer of Berat Castle in terms of logistics and infrastructure. 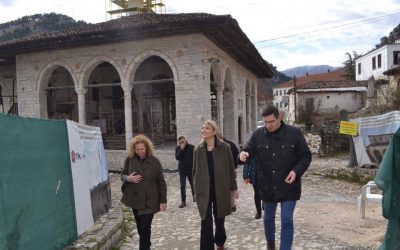 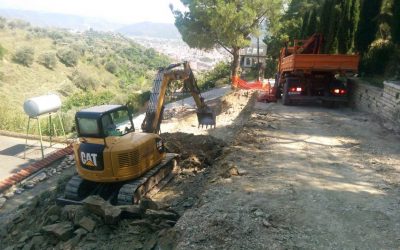