Former Prime Minister of Kosovo, Ramush Haradinaj, called the meeting of Prime Minister Albin Kuri with the President of Serbia Aleksandar Vucic in the framework of the dialogue between the two countries in Brussels a “vain meeting”.

Haradinaj says that the US should be included in the dialogue and not be left in the hands of the EU, while he said that “each party has only one interest, to deceive its own people with populist rhetoric on the eve of the elections”.

“The Prime Minister of Kosovo has decided not to do anything in this process. He does not want to realize that without US involvement, dialogue is dead. “He does not want to understand that he is at a dead end with Borel and Lajçak”, he wrote, among other things. 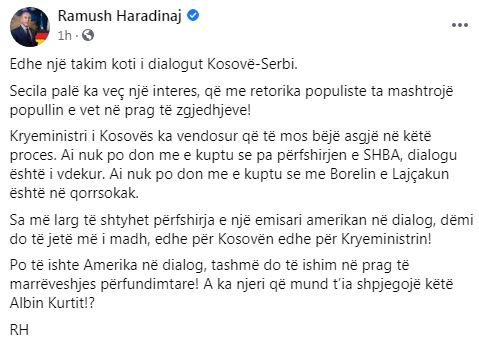