EU one step ahead of US, more citizens vaccinated against Covid

According to data released Saturday, The European Union has vaccinated more citizens against COVID-19 with a single dose than the United States. 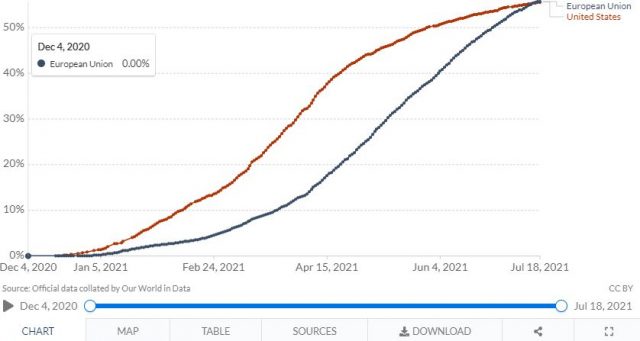 55.7% of EU citizens have received a dose of a vaccine against Covid compared to 55.5% of Americans. French Deputy Minister for European Affairs Clément Beaune posted the figures on Twitter on Saturday, expressing happiness for the achievement.

#Vaccin | The European Union has previously vaccinated a large proportion of its population at the highest dose of the United States (🇪🇺 55.5% / 🇺🇸 55.4%). On continue, on accelerator! 💪🏻 # COVID19 pic.twitter.com/ldhdijgVJa

The new data comes after the 27-nation bloc has been criticized for months for its slow vaccination campaign.

But the US is one step ahead of the EU when it comes to full vaccination, with 48.1% and 42.5% of their population vaccinated with both doses respectively.