At the height of the summer holiday season on the famous island of Mykonos, also called the island of winds, the Greek government has announced the first unannounced local mini lockdown, due to the large increase in cases of coronavirus in the days The last.

The increase in the epidemiological burden in Mykonos was such that only this Friday 40 new cases were registered, a quadrupling of infections within just one week. With these data, Deputy Minister of Civil Defense Nikos Hardalias announced the resumption of curfew on the island from 1 am to 6 am, while music is banned in all premises from 6 pm, measures that take effect immediately until on July 26th.

For anyone familiar with Mykonos cosmopolitan life, its expensive concerts, bars and restaurants or its famous visitors, the decision was both unexpected and unpopular, especially for local authorities and businesses.

But 5 other popular tourist destinations have an increase of cases such as the islands of Ios, Santorini, Paros and Crete in its cities Rethymno and Heraklion and similar measures are not excluded for them, depending on the epidemiological burden.

Also in the government decision it becomes clear that events of any nature with more than 20 people in personal and non-professional environments are prohibited everywhere and those who violate this rule will pay fines from 50,000 to 200,000 euros.

All Greek opposition parties have reacted by calling the first local lockdown on the island a symbol of domestic tourism a failure. The foreign press reacted to the decision of the Greek government, stating that although these islands a month ago were considered covid free because all residents were vaccinated, now the arrival of tourists and non-compliance with the rules has led to over 300 active cases for five days.

While Greek specialists insist on intensifying vaccinations, the number of daily cases throughout Greece still remains high above 2500, while fortunately the number of victims and intubated is still low. 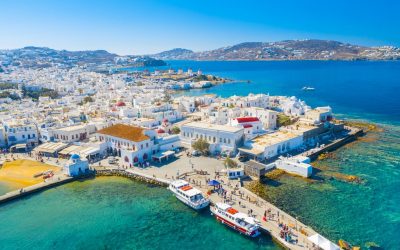