Hamilton overtakes two laps from the bottom and triumphs

Silverstone’s spectacular race in England. Lewis Hamilton once again shows that he is the champion and totally opens the race with Verstappen for this season as well.

The Dutch driver was unlucky on the first lap as the rear tire touched the rudder of Hamilton’s car and Red Bull came out and crashed into the defender barriers. Fortunately, the pilot after no problem.

A race that will be talked about for a long time #BritishGP 🇬🇧 # F1 pic.twitter.com/XMpp8gCMGy

Hamilton’s 99th career victory, but the latter will undoubtedly be remembered, as there was enthusiasm in the stands, where the fans have returned. Ferrari flirted with the victory, but was powerless. Anyway, the second place can be called positive. In third place was ranked Bottas.

Hamilton is literally turning right as much as he can and Verstappen turns into him! # F1 #BritishGP pic.twitter.com/IY3kFu8LW6 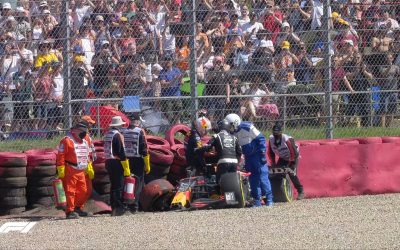