The Democratic Party has held the National Assembly after the general election.

In Tirana, the Democratic Party held the National Assembly today, in an attempt to reorganize them after losing the April 25 general elections. 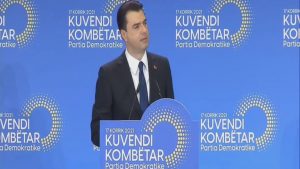 The chairman of the Democratic Party, Lulzim Basha, said that the election massacre of April 25 is a crime that awaits punishment and that the opposition will never recognize it.

He said that the new parliament, which convenes in September, is only part of the Democratic Party’s activity to denounce the Socialists’ abuse of elections and power.

The opposition Democratic Party held the National Assembly today almost 3 months after losing the general elections for the third time for the new parliament and has just re-elected its chairman for a third term.

The chairman of the Democratic Party, Lulzim Basha, stressed that on April 25, the Socialists carried out an electoral massacre carefully prepared to steal and buy votes throughout the country.

The April 25 election massacre, he said, is not recognized by the Democratic Party because it is a crime that deserves punishment, in a series of elements. 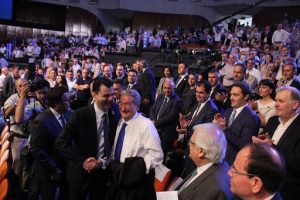 He listed the massive vote buying, pressure on voters, the merging of the ruling party with the state, the misuse of public assets by the ruling party, the theft of private and personal data of Albanians from the ruling party and the establishment of a criminal justice system. unilateral, undemocratic and illegal constitutional changes, contrary to the recommendations of the Venice Commission, just 6 months before the elections, until the unprecedented increase of invalid ballots, a figure three times higher than the difference between two parties.

“The election massacre of April 25 did not happen in one day, but the Rama-Doshi regime has worked feverishly to prevent by any means the change that the Albanians demanded. That they worked feverishly only for their own interests, and against the interests of the ordinary people of our country “- said Mr. Basha.

The Democratic Party has deposited with the Central Election Commission and the SPAK thousands of information, facts, documents, months, weeks and days before the elections, proving how the regime was implementing a criminal project of distorting the will of the citizens through the biggest theft. in the history of Albania through the cooperation of the government with criminal groups.

Internal debates in the Democratic Party and the lack of victories in local and general elections have highlighted ever-increasing tensions and currents.

Some critical voices in the DP, running for mayor such as Fatbardh Kadilli, Agron Shehaj and Edit Harxhi, demanded Mr Basha resign from the party leadership due to the loss of the April 25 parliamentary elections, when the Socialists took a third term in office.

Candidate Fatbardh Kadilli expressed concern about an unfair race, often similar, he said, to the violations the DP said the Socialists committed in the April 25 elections.

But Mr. Basha was re-elected chairman of the Democratic Party with a wide margin of votes in front of 3 other competitors, who accused him of unequal competition in the party and the loss of the parliamentary elections on April 25.

It remains to be seen the next step of the Democratic Party after the boycott of the parliament and the local elections, its behavior with the smaller allies, and especially the attitude towards the socialists, who dominate the parliament in September.

Mr. Basha also had an invitation for cooperation, an outstretched hand, as he said, for all those who during the campaign fought more against the Democratic Party than against Prime Minister Rama.

The leader of the opposition has another hand extended for cooperation by the Socialist Party, as Prime Minister Rama says, in favor of European integration reforms.

Rejecting allegations of election fraud, the Socialist Party leader said citizens entrusted the SP with a third term in government following the good governance of the pandemic crisis and the earthquake crisis.

But the reconfirmed opposition leader told the assembly that Albania is again at a crossroads, due to election theft.

He blamed the Rama government for not helping people during the Covid pandemic, but only fines and propaganda, and on the other hand continued abuses with public finances, as it did after the 2019 earthquake, leaving citizens at the mercy of fate.

The new parliament convenes in September, when it remains to be seen exactly the attitude of the opposition towards the elections and the highest legislative institution, which it abandoned 2 years ago, burning the mandates of its deputies.