The cars that Enver Hoxha traveled with

In the human history of the last 100 years, one of the greatest curiosities has to do with the car brands with which the heads of states have traveled. Especially of those top executives, whose lives have been shrouded in more mystery than of music or cinema stars who have been much more open to the media and the public…

Mercedes A Mercedes 600 type limousine was the diamond on the crown of the cars with which the senior leader of the Albanian communist state, Enver Hoxha, traveled.

Nowadays finding a Pullman 600 that is not owned by anyone is considered quite a difficult thing. It should be noted that of this expensive and glossy type, designed and assembled between 1963 and 1981, there are only 2,677 specimens.

However, Enver Hoxha preferred to use a Mercedes 300 SEL on the streets of the capital or on short trips. To go to the office in the Central Committee, Enver Hoxha did not use a car, but walked. While the six-door limousine rarely moved.

This dossier is based on three testimonies that were given to me during timely interviews: of Sulo Gradec, the former head of Enver Hoxha’s escort group, Arif Bizhga, one of his companions after the war, and Hamdi Sina, the former driver of Hoxha family.

If Enver Hoxha was sitting in the back seat of the car, he would not have had the courage, but you could not recognize the fear, while the slightest carelessness was marked with “red paint”. The driver of the vehicle had to perform the task accurately, while the escort officer followed the whole process with suspicious attention until the last moment. On the boulevards of the capital, but also on inter-urban roads, the Benzi 300 SEL with gasoline, a super product of the German West, should not exceed 60 kilometers per hour. Only in this way was the life of the head of state secured in any case. Everything determined by the experts was signed by Prime Minister Mehmet Shehu himself.

Immediately after the war, Enver Hoxha used a Fiat “Millecento” and after that he got an “Alfa Romeo”, both Italian production. But after this period began the introduction of Eastern production cars. For high-level delegations, as in the cases when Khrushchev, Sianuku and Chu En Lai came to Albania, the Soviet ZIM was issued, discovered. Enver had had a ZIM since 1950 as a gift from Stalin with license plate 0331. In 1954 he exchanged it for a ZIM as the Russians at the time brought cars of this type for the entire leadership. In the 60’s a Chinese car “Red Flag” came to him. Meanwhile, Enver Hoxha used a “Gaz 69” for mountain roads, 4 × 4 which was a very good Soviet production.

After the ’70s, the western cars returned to “Bllok”. At that time 8 Benzes were also ordered in Germany. 7 of them were “280 SEL” taken by the members of the Politburo. The 8th car was a “Benz 600” type limousine with 6 doors for Enver Hoxha. According to people who served the communist leader “Benz 600”, the 6-door limousine was electronic, with a sofa that was raised when there were bad roads, with glass that prevented communication with the driver and with the rear seats that were folded to create a space. big. Consumed a total of 15-16 liters of gasoline per 100 km.

“Mercedes 600” was created from the excellent tradition of Mercedes, for the production of luxury limousines of the highest caliber, with super technological power 600. It was a world-class limousine, which successfully incorporated a mix of technology, of a quality indescribable, with sophisticated features and astonishing performance. This car came as a surprise to the market.

The bosses holding the Mercedes 600

If you search in the magazines of the time, you will find materials that talk about the expensive production of the Mercedes 600 and the people who had the opportunity to use one of the rare copies. Beautifully designed and built, the Mercedes 600 limousine model was very exclusive and astronomically expensive. The most expensive car in the world, in 1965 it cost more than $ 22,000. It had prominent clients, including diplomats, industrialists, and movie stars. Celebrities have owned Mercedes 600s, including: Coco Chanel, Elvis Presley, Elizabeth Taylor, John Lennon, Aristotle Onassis, Jack Nicholson and Bob Jane. The trend of these cars became the trend of cars of diplomats and political figures, many of whom were communist leaders. They have owned Mercedes 600s for years: Hirohito, Idi Amin, Jomo Kenyatta, Nicolae Ceauşescu, Leonid Brezhnev, Enver Hoxha, Pol Pot, Fidel Castro, Josip Broz Tito, Saddam Hussein and Kim Il Sung.

For many years, some of Enver Hoxha’s cars have been in the fund of Kinostudios which used them to play movies of the time.

Enver Hoxha’s rare Mercedes 600 is no longer on the list of the Delegation Park where he had served for years, in which many of the foreign personalities who landed on Albanian soil after 1990 have ridden. Mercedes 600 production of the years ’70 has been replaced by another Mercedes 600 series, much more modern but with much less value 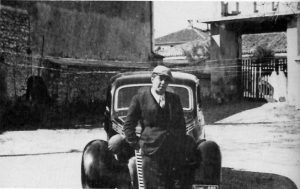 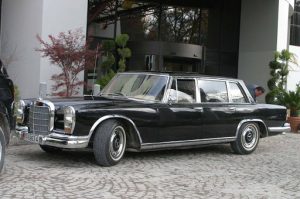