“Even the poorest of Albanians … has a royal shadow”

The most forgotten country in Europe, Albania. In the 1930s ferries landed daily from the heels of Italy and a five-seater Adria-Aero-Lloyd aircraft flew three times a week to Tirana airport, but services were below operating standards and could not be operated without subsidies .

In the smallest Balkan country, foreigners were so rare that they immediately became famous. A respected Englishman, Frenchman, or American who showed satisfactory interest in the country might find it relatively easy to obtain a reception from the politician-king.

There was a story according to which when Zog was bored he would call the hotels to find some interesting stranger to exchange two chats with. His palace was less than five minutes away and the common language was found very easily.

The king was not cosmopolitan, but he spoke Turkish very well, German well and French enough to converse.

English was not an option, he refused to waste time with a language that obeyed grammar only ten percent.

A guard with a bright “Z” in the cloak accompanied the visitors through the red brick road to the royal complex, southeast of the central square. A secretary, perhaps Sotir Martini, or energetic adjutant Zef Sereqi appeared in front of the guests to inform them on some points of the protocol.

Twelve steps further, two-story villas with yellow putty, which had been built for a Turkish merchant before the war, appeared.

Heading into the small reception lounge with bright mirrors and Venetian chandeliers the visitor could see the courtyard stallion through the curtains before the glass shutters appeared. A man with brown hair immediately appeared on stage, sitting at the end of a long, well-lit room, furnished in a modern style with green wallpaper.

The king looked small and almost invisible between the large red wooden table and the large portrait hanging on the back wall. The table top was neat and shiny. The painting featured a stern middle-aged woman with a not-so-royal appearance. The visitor entered the room and coughed easily.

There was always a puff of tobacco smoke and rarely any windows open. He bent three times (as instructed) and walked forward with careful steps.

Those less fortunate are often stumbled upon decorative rugs laid on polished floor. As he approached the table, his eyes focused on the most extravagant feature on the horizon: the King’s mustache.

Although very large, they were always trimmed and styled with regular thin tops. The temptation to stare at the mustache had to be subdued as the king rose slowly and whispered a few words of greeting in a low, clear voice. He was about 1 meter and 80 tall, his upright posture and his figure withered.

He did his best to look fit: A double-breasted gray suit by Savile Roë, a white shirt from Sulka, Paris, handmade shoes made in Italy. A calm smile accompanied the strong handshake and the visitor sat down.

With a contemptuous gesture, the King offered a range of cigarette brands from his table. He always took one for himself (apologizing to non-smokers) and as the cigarette kept him busy for a moment, the visitor could scan the king in mind.

He had a long pink face, not with Mediterranean features, coming in a conical shape from the broad forehead to the narrow chin. The forehead was high and could have been higher had it not been for the combed hair on the left side. Then, it was noticed, strange as it may seem, that the beard was not as sharp as it looked in the picture.

The most striking feature was the straight nose, which in profile fused with the forehead in a straight line. Occasionally drooping eyebrows gave it a gloomy-looking look that resembled charming and easily comical.

The visitor then wondered if the 38-year-old aristocrat was indeed the ruthless highland leader who had destroyed his rivals and established the kingdom.

The bird sat in his chair, smiling lightly again, as if revealing to the visitor the shadow of a secret that only he himself knew. Despite the laziness that appeared in the portrait, the blue-gray eyes were always on alert. “Shoot your inappropriate questions,” he said with a laugh before continuing to give completely sober answers.

Why did he turn Albania from a republic to a monarchy a few years ago? There was only one reason for this. The change was made in accordance with the spirit and desire of the Albanians, whose political foundation had always been the division into leaders and barons, each led by a supreme chief.

The intonation of his voice sounded strangely young; a kind of teenage reservation immediately dispelled the idea of ​​a room snake. 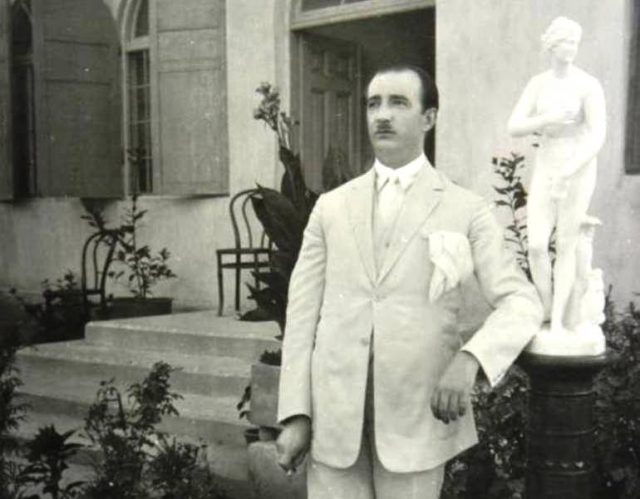 “The only difference for me is that, instead of working eight hours a day, I now work 18 and take responsibility for the whole state. I am a single employee doing my job.

“This is the meaning of the kingdom for me,” he said with a comical grin. The king certainly did not deny the fact that Albania had major financial problems.

How can a royal family cope with such a poor nation? This objection was politely shifted from the atmosphere. “Financially, a king does not cost a country a penny more than a president.” Both need a palace.

Both need guards. With another smile – colored with an inappropriate nuance of romantic melancholy – Zogu was referring to his white gold-embroidered uniform, closely associated with it.

It was bought before he took the throne: “When I was president I had to dress as the post required, but even the poorest Albanians have a royal nuance, so now that I am their king it is not necessary to emphasize it in a any way ”. In a stubborn way it seemed as if he was seeking approval, even intimacy.

He had an intimate intonation alternating with the not at all personal content of his answers, and kept his eyes fixed on the guest, oblivious to the buzzing of his assistants penetrating between the glass doors. It was a common mistake for the monarchy to be considered luxurious, he continued.

Of course, the king of the Albanians did not think that he belonged to the divine right. He was a constitutional monarch, who understood that his power came from the people.

Did that mean a free and democratic regime?

The bird was about to shake his head in approval when he remembered that foreigners had the confusing habit of lowering and raising their head to affirm and shaking their head sideways to deny. He strained to move his head up and down.

“As the king of my people, I have no interest in which party wins the upper house through constitutional methods. “This will help educate people along democratic lines, as in the United States, and provide greater freedom for all.”

Were there political parties in Albania?

Not in the formal sense at the moment, he confessed. At the moment, the king of the Albanians was to be the leader and teacher of his people. Real political development will take time.

“A five-year-old child cannot be taught in the same way as an adult. “Only by continuing the fight against illiteracy can the powers and responsibilities of the people elected as representatives increase.”

Significant progress had been made in education, he stressed. Not long ago, no more than two thousand children went to school. Today, that number was about 60,000.

“The high status of women is one of the main factors in strengthening a state,” Zogu declared with conviction.

“I think I will feel the fulfillment of the greatest mission of my life, when the status and culture of women in Albania reaches its peak, first at the height of other Balkan countries and then at the level of women in the western world.” Political rights were only one segment of the process.

“I want to educate women, but I also want to teach them to be good mothers and housewives. “I want Albanian women to be good women like her.” He turned the chair and leaned slightly against the portrait hanging on the wall behind him, the only portrait in the room actually.

King Zog with the Queen Mother and three of his sisters, dressed in the national costume “She is my mother”, he explained with feeling and paused for a moment to put his thoughts in order and to light another cigarette.

Polygamy and cradle engagement were already banned and the veil would soon be removed. “It will be a long process because we need to eradicate many prejudices and immediately after that will come the right to vote for women.

The right to vote for women is a new phenomenon and in the most advanced societies, remember, “We are centuries behind Europe in terms of civilization,” the King remarked with a frown. Anyone could tell that his subjects of conversation were ignorance and progress.

It was not their fault. Turkish rule until 1912 had left the feelings, morals and farming methods of the Middle Ages. If the visitor traveled in the mountains, he would be shocked by the poorest living conditions that could be found in Europe.

“I am very ashamed of this sometimes,” he sighed. “Our only excuse is that we can’t do it all at once.” Five hundred years in the country had to be done in some way.

“My goal is to civilize my people and do them as much as I can to acquire Western customs and traditions.” Blood feuds may be present in various parts of the kingdom, but law and order had made great progress recently.

The king said coldly that he himself was the object of many hostilities, and none of them had succeeded. At one point in the interview, King quit smoking and bowed slightly with a reflective look in his eyes.

Putting delicate white hands on the table, he spoke softly and honestly: “I will remain loyal to the interests of Albania and the well-being of its people, even if I have to sacrifice my life.

If these words do not justify my actions, then everything I have done so far for my country is just a pretense. ”Anyone who was not convinced by Zog’s honesty to this point would probably never be convinced.

The satisfied sovereign then thanked the visitor for his ingenuity. Foreign governments, unfortunately, were not always so quick to evaluate his work.

Albania was a small country, almost as big as Wales or New Jersey: 354 kilometers long and 144 wide. But Zogu insisted that the position at the entrance to the Adriatic Sea, gave him important strategic importance.

“Albania’s independence is essential for peace in Europe,” he said. It must be a neutral, permanent state like Switzerland. This comparison could be taken further.

His dream was that one day, new and beautiful roads and hotels would turn his “Cinderella” into a coveted tourist destination, offering both alpine skiing and Mediterranean beaches.