Dustin Poirier defeated Conor McGregor for the second time, at UFC 264, with the American coming after being stopped by a judge and bearded at the end of the first round after the Irishman suffered a horrific ankle fracture. 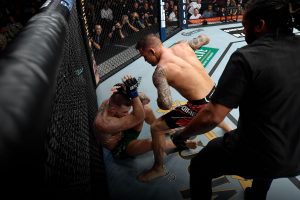 McGregor was on his back for most of the round after trying a failed guillotine early in the round but he managed to get back on his feet at the end of five minutes.

However, the former two-time UFC champion lost in the end before time ran out for the first round.

Poirier with some good kicks managed to tire the Irishman, while McGregor’s weight when he returned to the ankle, caused him a terrible injury by breaking and he fell to the ground clearly from the pain.

The referee decided to stop the match and give the victory to Poirier, but McGregor did not like this at all.

The Irishman shouted in anger and demanded that the war be called the doctor’s cessation and not Poirier’s victory. / Telegraphy /

Dissemination of the Delta variant / Greek expert: It will affect everyone, the way to escape is vaccination