Lionel Messi’s Argentina has won the final against Brazil in Maracana, winning 1-0. A goal scored by Di Maria in the 21st minute was decisive for this match while Lionel Messi has already broken the taboo and won even more national trophies. 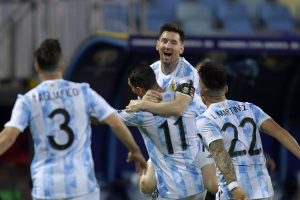 A final with more interference and interruptions but which finally turns Argentina into the winner of an international tournament, taking the Copa American in their third final.

It was a match that started with a more ball control from Argentina but that the first chances for a goal belonged to Brazil but that Argentina would score from its first attempt.

A ball passes from Argentina’s defense towards Di Maria but it was Renad Lodi who fails to stop it well and the ball reaches Di Maria who finds himself face to face with goalkeeper Ederson and with a parable scores a goal in the 21st minute -of the match.

The first half ends with a minimal result of Argentina until there was no chance for a goal to stand out.

In the second half, it was Brazil who constantly attacked Emi Martinez’s gate. At one point it was thought that the result was equalized as it was Richarlison who would have scored a goal but after the review in VAR it turns out that he is in the offside position, a goal that was scored in the 52nd minute but that was invalid.

Brazil continued to insist on finding the equalizer but that the match had many interventions and many interruptions for the tough game of both teams.

Brazil in the last 20 minutes would continue the attacks without stopping until the best opportunity to score had Gabigol in the last minute of the match.

Messi also had a chance to score in the extra minutes but failed to do so.

In the end Argentina managed to maintain the lead and Argentina and Lionel Messi after a long time manages to win a trophy with this National.

Hand contraction / Why is it caused?

VIDEO / Leu himself muddy before reporting and said he was dirty while cleaning, RTL journalist fired