The weather takes a sudden turn / Here is what is expected in the coming days!

SHMU announced that the next day unstable and humid air masses of northwestern origin are expected to penetrate over our country.

In this way the weather initially (early morning hours) starts clear with few transient eclipses. But, gradually starting from noon to afternoon, there will be an increase of moderate to dense eclipses in most of the territory.

Cloudy skies will be accompanied by occasional low to moderate rainfall in the form of thunderstorms. In the hilly-mountainous reliefs due to the strong thermal contrast these precipitations will also be in the form of storms and thunderstorms accompanied by electrical discharges and hail. It is also possible that in certain locations for a short period of time the amount of rainfall is high.

Rainfall will also include some areas of the coastline (Velipoja, Shengjin, Dhërmi – Llogara), while the rest of the coastline is expected to have transient eclipses or the possibility of light rainfall in the form of drops. Temperatures are expected to drop to noon values. 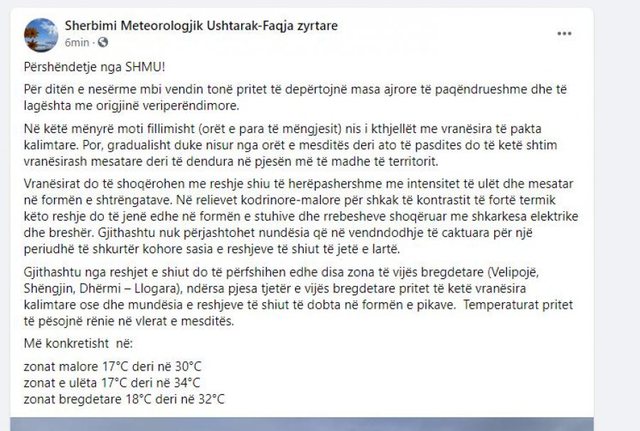