Ali Asllani is undoubtedly one of the most prominent personalities of Albanian poetry, especially in the years after the period of national independence and in recent times. He entered Albanian literature as a late renaissance. His poetic voice appeared in full in the Albanian literary life, in the ’20s-’30s, when they were still writing, Andon Z. Çajupi, Ndre Mjeda, Gjergj Fishta, Asdreni, Fan S. Noli, Mitrush Kuteli, when the beginnings had started or their creativity: Ernest Koliqi, Ethem Haxhiademi, Ramiz Harxhi, Lasgush Poradeci etc. In this general framework of our literary life, the poetry of Ali Asllani is distinguished for the originality and authenticity of his voice. He is a special poet, another beautiful voice, who joins the general choir, the real Albanian poetry of that time. In that climate, in that literary world and at that time he created and lived. Albanian poetry of the ’20s and’ 30s is permeated mainly by patriotic motives. Ali Asllani was born in Vajza, Vlora and was orphaned at a young age. /Konica.al/ In Vlora he completed primary school, in Ioannina high school, gymnasium “Zosimea” in 1888. At first he studied medicine, but then continued the Higher Institute of Political-Social-Administrative Sciences in Istanbul. After school he completed an internship in the prefecture of Ioannina. He was one of the prominent members of the “Union” Club. For his support of Ismail Qemali, he began to be persecuted by the Turkish government, and was even ordered to be interned in Aleppo, Syria. He managed to escape exile, moved to Corfu and from there to Vlora. He participated in the Assembly of Dibra, as a representative of the Club “Union” of Ioannina. In 1910 he returned to Istanbul, after the fall of the cabinet that exiled him. He was re-appointed deputy prefect, but on the condition that he work in Albanian areas. After the declaration of Independence, Ismail Qemali entrusted him with the task of Secretary General of the Presidency and the Council of Ministers, where he remained until January 22, 1914. After the departure of Prince Vid, he spent some time in Italy. The Italian occupation found him deputy prefect, but because he opposed the occupation he was fired.

After the liberation, he was one of the first founders of the Writers and Artists League. Until 1952, it was held from a meager income from translations for the Institute of Science, but this opportunity was cut short. Ali Asllani is distinguished by his patriotic motive, which is direct, that is, he is the immediate voice of the capital events of the new Albanian history, events which Ali Asllani (poet) experienced personally and deeply, which shook his artistic conscience. After the first publications in the press of the time, when he was a student at the Zosimea Gymnasium in Ioannina and a student in Istanbul, in 1914, we find his poetic beginnings. The great connection of his creativity with the popular song of Labëria can be felt from there, which will always be one of the basic characteristics of his poetry. Under the influence of Ismail Qemal-Vlora and the Albanian club of Ioannina, Ali Asllani joined the Albanian National Movement. According to press reports at the time, Ali Asllani was one of Ismail Qemali’s most ardent supporters and one of the first to be threatened with arrest and exile by the Ottoman government in Aleppo, Syria. 28 poems of this period are known, some of them are published in the then press of Vlora as “National Hope”, “National Defense” and some are preserved in manuscript…/Konica.al 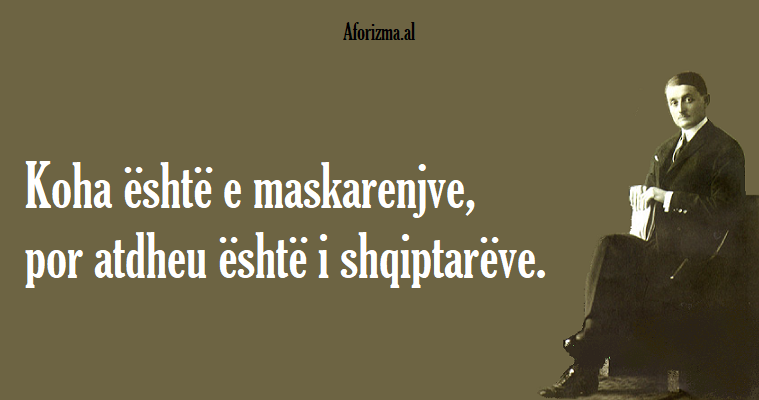 WHAT DOES PATRIOT MEAN?

What does patriot mean,

A bunch ‘ah of a bunch of tears,

A man without a man!

No no! the husband beats them ‘

Do buçit si val ‘on shingle.

The blacker and blacker,

The lip is torn to pieces

But the sponge is not forgiven at all.

In the bosom he kindled the fire,

Whether in the river or in the sea

His fire is not lost!

I know how to make sun and rain,

I know how to make rain and sun,

Because he keeps his head up,

Because it has deep roots!

Let us be proud!

Since it leaves the west,

Both on land and at sea

We have the most beautiful part,

In the beautiful plans!

So let us be proud,

Noble tribe in the first place,

We were titans, we are titans

And always all titanium,

The eagle strikes a lot.

Courses are measured by storms!