Video / In Prishtina, the derby of the Albanian teams “Drita-Deçiq”, was won by the locals with the result 2-1

Drita scored a victory against Deçiq in the first match of the first eliminatory round in the Conference League, at the stadium in Prishtina, with a result of 2-1. 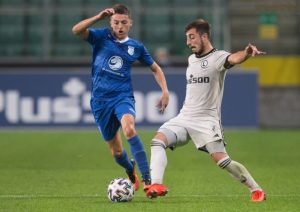 It was our team that surprised the runners-up of Kosovo, scoring a goal in the 3rd minute of the match, through Ilir Camaj (1-0).

Drita team quickly returned to the game, through Almir Ajzeraj who equalized the score in the 10th minute (1-1). With this result and ended the first part of the match.

In the second half Drita was better, trying to find the lead goal.

In the 80th minute, the captain of Deçiq, Jonathan Dreshaj was punished with a red card, so Deçiq was left with one player less. This was a moment of nervousness and completely unnecessary reaction of Captain Dreshaj.

There were such moments of tension at the end of the match, but in the end it ended with the victory of Drita.
The return match is played on July 15 in Podgorica.