An Albanian enclave in the heart of Salento. It is one of the suggested journeys in the volume “The Great Salenta to be discovered” – an unusual journey in the heel of Italy.

Salento, like all of Puglia and other regions of Italy, in the 15th century was the land that hosted the Albanian people, who were being displaced by the Ottoman invaders. Given the geographical and religious proximity to the other side of the Adriatic, the historic province of Terra d’Otranto welcomed the numerous settlements of Albanian soldiers and refugees, who, over time, formed the so-called “Albania Salentina”.

They were decades of great migrations for Albanians, favored by the kingdom of Naples: in a letter of 1452, King Alfonso of Aragon ordered the prince of Taranto, Giovanni Antonio Orsini del Balzo, to “welcome the good Christians who came from Albania. from the conquest by the Ottomans, who were more powerful than them. The Albanians landed in the land of Otranto in 1461, when the Albanian strategist, Skanderbeg, came to help the successor of King Alfonso, Fernando I of Aragon, to fight the rebellion of the local feudal lords supported by Anjou French.

For help, Skanderbeg was rewarded with several territories in Puglia, where most of his soldiers settled and later, reunited with their families. With the death of Skanderbeg in 1468, Albania fell into the hands of the Ottomans and many of the Albanian refugees came to the land of Otranto, to settle in exactly those territories that were already inhabited by their compatriots.

The course of Albanian migration lasted until the 16th century. In Salento alone, there were about sixty Arbëresh settlements, scattered in the three provinces of Brindisi, Lecce and Taranto. Albanians, of course, retained their ethnic, cultural and religious characteristics of the Greco-Byzantine rite and for a long time preserved the language, customs and traditions – but, over time, some assimilated with the local population. An Arbëresh enclave still remains today, south of Taranto, with the epicenter of the municipality of San Marzano di San Giuseppe, along with the municipalities of Carosino, Faggiano, Fragagnano, Monteiasi, Montemesola, Monteparano, Roccaforzata and San Giorgio Jonico.

Among the Arbëresh communities of Salento, San Marzano di San Giuseppe (Saint Marxani) continues to preserve the language, culture and traditions of the mother country. Of Albanian origin, Palazzo Capuzzimati (also known as “Palazzo Marchesale” or “Casalini”) with the private church of San Gennaro, from the 16th century, in Largo Prete; through Giorgio Castriota you can still see the ancient Arbëresh houses with characteristic Albanian chimneys.

About three kilometers from San Marzano, in the Grotte district, on the provincial road to Grottaglie, is the Sanctuary of the “Madonna delle Grazie” with its rock church of Byzantine origin. The underground church overlooks a blade, in a suggestive gravitational scenario, characterized by the presence of caves along the ridges. The rock church has different periods of construction: the first, until the 14th-15th century, with the dedication to San Giorgion; the second, from the 16th to the present day, for “Madonna delle Grazie”. The hypogene has a quadrangular shape, with three different entrances, two overlooking the edge and one connecting the hypogum to the church, from the top, via a staircase. The main element is the fresco “The Virgin and the Child”, which was given an extraordinary importance. Also worth a look is the Mother Church of San Carlo Borromeo, in Corso Umberto I; “Casa Rossa”, an antique farmhouse, with the Arbëresh chimney, just outside the city, in the Ficone area; as well as the big trunk of “Cosimo Mazzeo”, called “Pizzichiccio”, in Bosco. 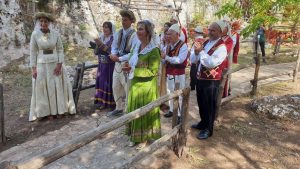 In San Marzano di San Giuseppe, especially among the older groups of the population, the old Albanian language – Arbëresh gluha – is still spoken and the traditions and customs, songs and dances of the homeland, Albania, are preserved. Every year, public events are organized, with Albanian costumes and language, with the customs of their tradition, such as “Put on a crown” (being crowned), which represents the typical Arbëresh wedding rite. Some associations are active, such as “Pro Loco Marciana”, committed to keeping alive the Albanian tradition, especially among young people.

To remember the origin, in the center of the village, on the road dedicated to him, stands a large bust of the Albanian leader and hero, Skanderbeg.

Even the feast of the patron saint San Giuseppe, celebrated on March 19, in San Marzano di San Giuseppe has ancient roots and is experienced by the population as a very important event. Related to the origin of the cult of the saint, several rites are practiced, such as the blessing of round bread, the procession of flocks, which will then be used to light a great fire and the setting up of the “Tables of St. Joseph”. On the morning of March 19, before the procession of the saint, in front of the Mother Church of “San Carlo Borromeo”, the so-called mattre (table for the poor) are prepared, with typical traditional dishes, blessed by the parish priest, to be distributed to those present, in homage to the hospitality of the Holy Family during the pilgrimage to Egypt.

Also in other centers of the Albanian enclave, one can still find architectural references of the Arbëresh culture, such as typical chimneys, churches or church remains, ruins of farm houses. In Monteiasi the Albanian traces remain in some typical adjectives of the country. From a house on another Albanian farm in San Crisperi, a village in Faggiano, only the ruins of the church “Santa Maria di Costantinopoli” remain. In San Giorgio Jonico there is an Arbëresh chimney on Simone Veil Street; another, located on Cesare Battisti Street, near the Ayala Valva Castle in Largo Osanna; on Madonna della Croce there is the Chapel of the Madonna of the Cross, which was built on the site of the former Arbëresh church “Santa Maria della Presentation”; and from the street “Pier Giovanni Zingaropoli” there are still parts of ruins from the Albanian “Casale Belvedere”. About two km southeast of Roccaforzata, there are other Albanian traces, such as the “Sanctuary of Santa Maria della Kamera” and the ruins of “Casale Mennano”. 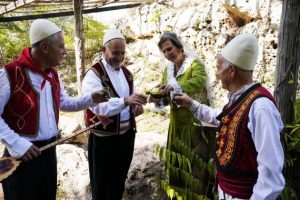 In the Arbëresh enclave of Salento, you not only get lost in the past of Albanian historical migrations, but also find a historical summary of the most recent migrations, dating to March 7, 1991, with the first mass landing in Brindisi and culminating on August 8, the same year, with the arrival in Bari, of 20 thousand Albanians, on the merchant ship “Vlora”. As had already happened in the 15th century, Salento and the Puglias did not lack solidarity and welcomed the refugees who had come from the Land of the Eagles, involved in a profound political and social transformation.

The Arbëreshë Salento enclave is today, a symbol of proximity to the other side of the Adriatic, due to the connections that this community continues to have with the motherland.

The famous liqueur “Borsci Elisir San Marzano” is produced in San Marzano di San Giuseppe, in the factory on the way to Martina Franca. The Borsci family is originally from the Caucasus, but after political unrest, they decided to move to Albania. From here, a nucleus of the family split in the wake of the Albanian national hero and landed on the land of Otranto, settling in San Marzano di San Giuseppe. In 1840, Giuseppe, the descendant, perfected the liqueur recipe inherited from his ancestors, giving life to an elixir that has remained unchanged to this day. Giuseppe Borsci put on the label of “Elixir” the words “Oriental Specialties”, together with the double-headed eagle – the symbol of Albania, today and from the weather.