Albania and a story with bananas …

The banana monopoly company (Regia azienda monopolio banana (RAMB)) was an Italian state-owned company, active in the years 1930-1940.It was established with the aim of transporting and trading in Italy, bananas produced on agricultural concessions that arose in those years, in the Italian Somali colony, writes Kreshnik Kuçaj for Scan.

After the Great Depression, bananas had become the most lucrative agricultural crop and were seen as a substitute for profits, given that the price of cotton had halved.

Also, this economic crisis had put in trouble the Italian shipping sector and in these conditions, unusual ideas for economic recovery were required.

Thus, the proposal that comes next is to jump into a market that was experiencing strong growth; ai of bananas.

In addition to the nutritional value and liking for consumption, bananas at that time were also considered as’ workers’ fruits’, for the fact that they were very practical to be consumed by them even during working hours, because the consumable part of the fruit was not affected by hand after being protected by skin.

In such circumstances, on December 2, 1935, the banana monopoly company was established, which was under the control and subordination of the ministry of the Colonies. This company, in addition to large ships that served to transport bananas, also set up special warehouses for their storage in major Italian cities.

After World War II, this company was dissolved. 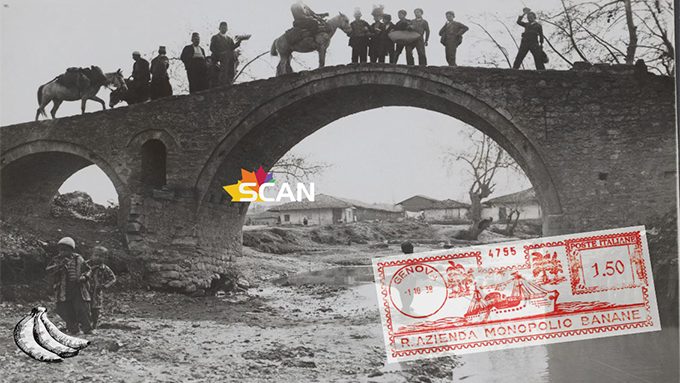 Albania and the ‘experiment’ with Somali bananas

In the State Archive there is a correspondence of April 1940, between the Directorate of the Fascist Party (economic office in Tirana) and the Italian Ministry of Africa, regarding the issuance of a concession to an Italian firm to sell bananas in Albania.

The object of the document is “Experimentation of the presentation of Somali bananas in Albania and granting the concession of shops for sale to the population”.

The correspondence shows that in the Albanian markets, bananas had already started to be traded. But under these conditions, the requirement was to have a special concession that established order in trading. The scheme envisaged was the same as that of Italy and consequently the model proposed in that year was that of control through the granting of a concession. The concessionaire had the obligation to set up some special counters in the main cities of Albania, to be traded only there. One of the concerns he expressed was that, not only were the prices often abusive, but also their quality was very low. Under these conditions, the concession was seen as an opportunity to increase the quality of the product in the market and on the other hand, to control the price.

The person granted the concession was named Martino Farinetti. At that time, Albania was considered part of Italy, as a result of the invasion of April 1939. Despite the establishment of the monopoly and the granting of the concession, the banana market in Albania in those years, faced “evasion”.

The end of the Second World War brought the merger of the Italian banana company and as a result, the lack of this product was reflected in Albania. Only in the 90s, the import of bananas returned to Albania with a high intensity, becoming an extremely demanding fruit by Albanian consumers, as it is today./Konica.al