The candidate for chairman of the Democratic Party, Agron Shehaj, has given a message on social networks regarding the elections that are being held today for the new head of the blue headquarters.

Shehaj talks about irregularities and pressures in the elections, about which he says that facts and data are being collected. According to Shehaj, in many polling stations his observers are being expelled, detained or prevented from monitoring the process.

“Our observers from the field have identified that there are thousands of members of the Democratic Party who have been excluded from the list prepared by the Central Election Commission of the Democratic Party,” he said. In the end, Shehaj called on the commissioners and party leaders not to turn the elections into an electoral farce.

We are closely monitoring the entire election process. We encourage all our representatives and supporters to give their best to protect the vote of the Democrats and the credibility of the Democratic Party, despite the irregularities and pressures.

We are collecting facts and data on all violations and irregularities. Unfortunately, I have to say that, in a large part of the polling stations, my observers are being excluded, banned or prevented from monitoring the process.

In branches 5, 10 and 15 in Tirana, my observers were expelled or not allowed to enter the polling stations. The voting process in these branches is being severely compromised because it is taking place without the presence of our observers and is being administered by the representatives of a candidate.

Also, in the following branches, my present observers are being kept away and are not being allowed to verify whether those who are voting are eligible to vote or not. So if they are on the list or have a membership card.

This is currently happening in branches 2, 7, 12, 16 of Tirana, in Delvina, Patos, Devoll, Shkodra, Librazhd, Dibra, Berat. Even in Devoll and Debar they are being allowed to vote en masse without any control.

Our field observers have identified thousands of Democratic Party members who have been excluded from the list prepared by the DP Central Election Commission.

Finally, we were informed that in Durrës they have added a new list of voters in addition to the list that was sent from the headquarters in Tirana.

Voting in the DP has started with a very low democratic standard. I urge commissioners and party leaders not to turn the election into an electoral farce.

I urge ordinary Democrats to fight for their vote and not allow anyone to deprive them of the right to vote. 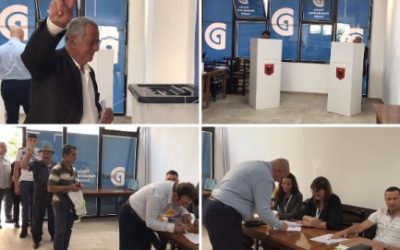