Brother-in-law: He was an alcoholic, he heard rumors in the village

After about 30 years of marriage together, Menturie Bici will not rest next to her husband, Qemal Bici, who cut her life in the middle of Monday afternoon by massacring her with an ax. After the macabre act, the 56-year-old ended his life by hanging himself on a tree near the house.

The family of the 53-year-old buried their daughter in her native village in Mrava of Librazhd Katund. It seems that there was a long history of quarrels and violence between the couple, while the brother of the late 53-year-old says that Qemal Bici consumed alcohol continuously and that his sister did not prefer to divorce because of the children so as not to leave pa baba. He also says the 56-year-old was influenced by the words of others towards his sister.

“He may have planned it a long time ago. He has always been a very troubled drinker, addicted to alcohol. He was a local man and was influenced by people’s words. The sister did not divorce for the sake of the children because she did not want the children to live without the father. Children’s hatred did not. We have always had concern. We knew what a monster it was. He was not brave, he was a coward “, declares Menturie Bici’s brother (Rruplli).

Relatives of the victim say that in one case, the woman was raped so much that she could not get up and a few days after this act she went to the Police to report, but that law enforcement had not taken any measures to prevent further violence. and had not even issued a protection order. “I remember a denunciation he made a few years ago, when he tortured him so badly that he remained lying down. After a few days he went and reported him to the Police. “But the police did not give him a protection order to prevent this macabre crime”, says the victim’s uncle, Bujar Asgjeta.

According to sources, the perpetrator suspected that his wife was cheating on him with a teacher, who had once worked as a school principal in the village of Dragostujë, where the serious incident was recorded. Later, the teacher was transferred to another school in Librazhd, as a simple teacher. Despite the transfer, the conflicts between the couple had continued, as the husband suspected that the wife was continuing the relationship with the teacher, a conflict which culminated on Monday afternoon that ended with the death of both. Rumors of adultery circulating in the village were also confirmed by the victim’s brother.

It is not known exactly what happened at the couple’s apartment before the tragic act of murder, as they were alone at home and with the arrival of their 20-year-old son in the apartment, everything was over. The young man found his mother massacred at home and then his father hanging from a tree, both without signs of life.

The couple had four children, two of whom were abroad, one in Tirana and only a 20-year-old boy at home. “In the village of Dragostunjë, Librazhd, in the apartment of the citizen QB, about 56 years old, in still unclear circumstances it is suspected that he killed with a sharp tool (ax) his wife, citizen MB, about 53 years old, and then hanged himself. The investigative group under the direction of the Prosecution is at the scene and is working to fully clarify and document the circumstances of the event “, explains the local police.

Immediately after the event, an investigative group was set up to clarify the circumstances and motives of this serious event. The murder of Mentorie Bici in Elbasan, brings to 12 the number of victims of such crimes within the family and occurs within less than 24 hours after the discovery of another murder in Shkodra, where a 55-year-old man shot his sister with several bullets . 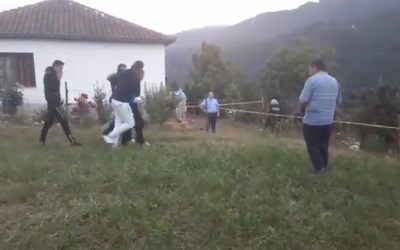