The analyst reveals the topic to be discussed on June 15th

The dialogue between Kosovo and Serbia, facilitated by the European Union, will continue on June 15. The news was confirmed today by the EU spokesman, Peter Stano.

This will be the first meeting between the Prime Minister of Kosovo Albin Kurti and the Serbian President Aleksandar Vuçi., In the framework of the negotiation process between the two countries. The EU has not announced the topics that are expected to be discussed at the meeting, but Prime Minister Kurti insists this will be “New beginning of dialogue”, not a continuation of that of “Old”.

While Kurti has stated that there will be no formation of an ethnic Association, the Serbian president has said that he will not go to Brussels if Kurti does not want to talk about this topic.

The chances of an important agreement between Kosovo and Serbia in this meeting seem to be slim. This is also stated by the well-known American expert on the Balkans at Johns Hopkins University, Daniel Serwer.

Serwer has said that the chances of a big deal are slim.

According to him, in this meeting will be discussed about the war missing and the agenda of the next meeting.

“You have to ask Lajcak and Palmer. I can say, the prospects for a great deal are minimal. “I think there may be something for the missing people, plus an agreement on a future agenda.” said Serwer. 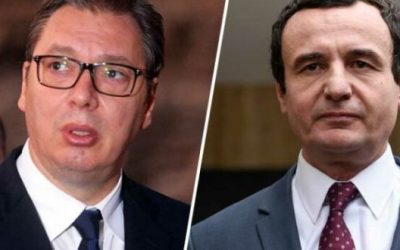