One of the most prominent personalities in the history of Albanian art, Pirro Mani has passed away, while the funeral ceremony was held in the US on Saturday. 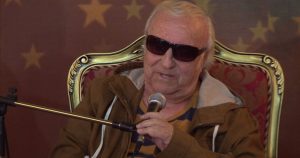 The actor has passed away in the United States of America, where he lived for some time with his family.

Studied at the State Institute of Theatrical Arts, GITIS, Moscow. After returning to his homeland, he was appointed director of the “AZ Çajupi” Theater, Korça, which he successfully directed for about eight years. From 1967 to 1992 he was the director of the National Theater, where he staged dozens of plays.

In his artistic career he counts over 80 performances. He has been honored with many awards. He is a master of directing mass scenes, a deep connoisseur of mise-en-scène. The culminating performances are “Cuca e maleve”, “The Second Face”, “Arturo Ui”, “The General of the Dead Army”, “The Age Before the Trial”, “The 12th Night”, “Prometheus”, etc. He has also been involved in several feature films. He has won many awards and has been honored with the high title “People’s Artist”.

Director Pëllumb Kulla touched everyone with his speech at the funeral ceremony in Mani.

Dear Piro! .. We are gathered here around you, next to your life partner, good Pavlina and your wonderful children, to accompany you to your last home. We know very well that with your mind, the whole Albanian world is following you today. It is that universe, spread today over the entire surface of the globe. It has been two days that he is sharing with you being grateful and expressing the highest appreciation, for what he gives, for what he leaves and ensures that you will remain unforgettable, in the life of lives.

We, your friends and comrades, who came from all over the American continent, where the wheel of fortune brought us, are here to tell you that since you closed those eyes of your beloved, the Albanian world has deeply felt your escape. The means of communication of the press and media gave a warm light on the high realistic art, with which you treated the stage works of national dramaturgy, which even when they suffered from excessive politicization, made them lovable, even unforgettable, as the characters remain, Cuca, Jonuz Bruga, General, Bektasahi with two faces, Koz Dynjaja, and others… Thanks to your talent and merit, but also the luck that kissed you on the forehead, you, the creative volcano, were in the company of legendary artists like Kadriu , Naimi, Violeta, Pitarka, Stavri Shkurti, martyred colleagues, Spahivogli and Luarasi, all of whom are waiting for you in the eternal sky.

There, in the sky of eternity, you will find the gratitude of the geniuses of stage literature, of Shakespeare, Brecht, Miller. Their works, overcoming many obstacles, you brought as spiritual food to hungry art lovers. You will remain unforgettable your excellent role of Edi Karbone held by “the best acting performances of the Albanian theater in the pastures of world drama” and full of other achievements in the field of acting.

Being a leader and inspiration, the director melts and hides behind the brilliance of the actors he directs and they “unfairly” take the image concrete, occupy the attention of thousands of spectators, most of whom do not know, do not even feel, the need to know part of the all-encompassing merit of the one who led them, breathed their last and pushed them to glory. But others, and especially your collaborators, know how much of a part of their fame and greatness a director like you, Piro, had. For the actors, scenographers, composers of Korça, Tirana, Elbasan, Prishtina and Skopje, Piro Mani was a lucky coincidence that they were magnetized by your talent.

Personally, I will keep this American as one of the most precious off-stage periods, while for our conversations, I called Colorado. And then when we became neighbors in New York. we exchanged thoughts every week, every day, on the theater and the life we ​​had there, in the homeland.

We agreed that the history of our country could also be read through the history of theater. It clearly shows how the strains and releases in the repertoire coincided with the light and shadows in the brain of the paranoid patient. The dramatic story of the forbidden dramas of those who won crowns and divorced, of the spectacles that became the cause of clashes between the chiefs, the dramas that gave rise to the internment, transfer and imprisonment of authors, directors and painters; of worthless dramas that benefited and came to light from these kinds of clashes… The theater can very well tell, in its own language, the history of Albania in the second half of the twentieth century.

You had the wise opinion that even in the weakest drama the good director finds without a doubt a beautiful inspiring corner, an interesting character. Finds, for sure, a nail that connects aesthetic pleasure, inspiration. Then the artist strips the sweet fruit from the ideological peel and manages to taste it. Doesn’t it inspire the director, you said, a girl who teaches women to read and write ?! A 19-year-old partisan, who gives his life fighting and never finds out again, that his blood was used for another slavery more brutal than the occupation ?!

You, Piro, dig with dizzying courage and perseverance… I openly accepted the envy you caused me with an allegorical work like Brecht’s “Arturo Ui”, where together with you, the great director, shone all the stars of the actors engaged in to. Arturo Ui was the personification of the cruel careerist, of the unstoppable dictator before anything in his ascent, of the populist demagogue, who is careless whether they believe it or not, in what he says. We, in Albania, had one, which had caught our sun, and made us day and night. But we also had Brecht, who, as if you knew him, painted him for us. You, alongside Brecht, brought Viktor Eftimiu with “Prometheus” in his confrontation with Zeus: you brought Qamil Buxheli with “The Irreplaceable” – allegory wells, which are left from the most beautiful performances, to honor you and the theater where you worked. In Brecht’s most beloved aesthetic credits was the “Five tricks to tell the truth in dictatorship”. Here, these three works, more than the others, made it possible for you to show your beautiful fox and to satisfy your artistic ambitions, a pleasure that everyone enjoyed separately, without declaring, without commenting and without making a fuss. ! Such was the time.

Dear Piro, we have discussed, searched and found together why stage and screen artists usually mourn in their final departures. It is an advantage they have as they fill millions of evenings with gas and family sighs with laughter and tears. It feels like inequality when we see that they stand out even more than when a large-scale doctor or scientist dies. Science or medicine can not be the subject of comments and discussions in the family. Artists become almost part of the family and this inequality is understandable and justified.

That’s why your departure was felt so much these days. That artists die differently. You have gathered us here, but we cannot bury you, Piro Mani. We cover with soil only your stature afflicted by sickness and years.

You remain forever with your worshipers and continue to enjoy teaching them, giving them gas and smiles and inspiring them, as you have done all your life enlightened.

Easy to be earthy, Piro Mani!