Ramiz Lladrovci, mayor of Drenas, has been part of the list of people barred from entering the United States for many years now.

Lladrovci said that this did not penalize him during his work and career, but added that he does not feel good because he is on that list.

“The decision of the American administration has not penalized me at all, because I have extremely good relations with the United States. “Of course I do not feel good to be on that list,” Lladrovci told Radio Free Europe.

Along with him on the list are about 40 other Albanians from Kosovo, Albania or Northern Macedonia. Some of them, who were former members of the Kosovo Liberation Army, have held or held senior positions in Kosovo, as MPs or ministers in Kosovo governments. Some of them are: Azem Syla, Daut Haradinaj, Emrush Xhemaji, Fatmir Limaj, Rrustem Mustafa and Sami Lushtaku.

For other reasons, this US list has gained attention again, after the decision of the US State Department to ban entry to the US, former President of Albania, Sali Berisha.

In the announcement, US Secretary of State Antony Blinken said that Berisha, in his official capacity, in particular as Prime Minister of Albania, has been involved in corrupt practices, such as misuse of public funds and interference in public processes. According to DASH, the former Albanian prime minister has used his power to profit and enrich his political allies and family members.

As a result, his wife and two children have been barred from entering the United States.

Berisha said on May 20 that the charges against him were “public slander” and that his lawyer was preparing a lawsuit against Secretary Blinken.

“There is no one in Albania or in the world who can say that I am but I have been implicated in any corrupt affair, therefore I have instructed my lawyer in a neutral, and respected country such as France, to set up “against Antony Blinken a direct lawsuit for public defamation,” he said.

Tanya Domi, a professor at Columbia University and an expert on the Balkans, told Radio Free Europe that Secretary Blinken had mentioned that corruption was one of the most important issues in US foreign policy, and that he had made this known in a letter. first sent to senior officials in Bosnia and Herzegovina, that this country must fight corruption.

“The action against Berisha should serve as a warning from the Biden administration that it will use different mechanisms, carefully, and I see all this as a sign that they will address corruption issues in general,” Domi said.

Florent Spahija, an expert on legal issues at the Democratic Institute of Kosovo, also told Radio Free Europe that this decision shows that the United States takes the fight against corruption more seriously, but also helping the Balkan countries to come out as much as possible. faster than the period where corruption prevails.

“This shows that politicians must fight and take corruption seriously and not get involved in corruption, but be in the fight against corruption. The United States is pretty serious and invests millions in projects in the Balkans. “There are endless projects for these countries, which aim to democratize these countries and fight corruption,” said Spahija.

Asked why this administration has now taken this decision, Spahija mentioned the elections held on April 25 this year in Albania.

“This election process went relatively well in Albania, although there were accusations and counter-accusations for vote buying and manipulation, however this remains to be seen. “But I also consider that the pressure of the opposition there and the old policy is somehow holding the development hostage, that is why the American foreign policy has reacted”, he added.

Professor Domi said that the claims about Berisha have existed for some time now.

“One of the blocking points of Albania towards membership in the European Union is believed to be the issue of corruption, the rule of law, judges, who can not complete the criminal prosecutions. “It’s an early sign that the US administration is serious about this,” Domi said.

Such decisions increase the attention of ruling officials

On June 3, the White House issued a memorandum to US President Joe Biden, stating that the fight against corruption will be one of the core interests of US national security.

“Corruption threatens the national security of the United States, economic equality, global efforts to combat poverty, and the development of democracy itself. “But by effectively preventing and combating corruption and demonstrating the benefits of transparent and accountable governance, we can provide a critical advantage for the United States and other democracies.”

Among other things, Biden said that his administration will promote good governance, provide transparency in the United States and global financial systems, prevent and fight corruption at home and abroad, and do much to difficult for corrupt persons to extend their activity.

In the report of the international organization Transparency International, Corruption Perception Index for 2020, Kosovo this year is ranked 104th with 36 points, marking a deterioration in the fight against corruption, as it has fallen by three positions below last year .

Albania, although sharing the same number of points and ranking with Kosovo, has made progress in this regard, rising by two positions higher than last year.

In terms of other countries in the region, Northern Macedonia and Bosnia and Herzegovina share 111th place, Serbia 94th, Montenegro 67th, and Croatia 63rd.

Spahija has said that such decisions, such as that of the US State Department for Berisha, will make the ruling politicians more attentive to these cases.

“The United States is showing no hesitation in publicly discrediting someone who is corrupt or suspected of corruption. “And if the state does not act to prosecute or punish corruption, then this will be done publicly by American embassies or American foreign policy,” Spahija said.

Domi: Corruption in the Balkans, endemic

Domi believes that from her experience in the Balkans, corruption in the region is endemic.

“The rule of law is a difficult challenge for most governments there because they have been involved in corrupt activities. I am not an expert in the fight against corruption, but when you freeze someone’s assets and if they are tried and sentenced to imprisonment, then that is another story. “But the United States does not have the authority to do that.”

Spahija believes that in addition to politicians, the decision against Berisha is a message to the courts and the prosecution in Albania, asking for more work in this direction.

“The United States cannot fight corruption on its own in Kosovo, in Albania, or anywhere in the Balkans. The US authorities are promoting the fight against corruption and are constantly working to increase the level of the fight against corruption. If we think America should do our job, we are very wrong. “We have to do it ourselves, as citizens of the country, whether prosecutors, judges, police officers, anyone who has the authority to conduct investigations and send corrupt people to prison, we have to do it ourselves.”

The website of the US Treasury Department states that the Office of Foreign Assets Control, in addition to including persons in the so-called List of Blocked Persons, has the main purpose not to punish these persons, but to promote positive change.

The website of this Department further states that the Office for Foreign Assets Control removes hundreds of individuals and entities from this list every year.

“Each departure is based on a thorough analysis of the Office of Foreign Assets Control. “Maintaining the integrity of US sanctions is a high priority for this Office and a principle behind the review that analyzes any removal requests and applies the same standards to each of them.”

What request should be made for removal from the list?

The mayor of Drenas, Ramiz Lladrovci, told Radio Free Europe that he had tried several times to remove his name from the black list.

“I have written several times to the then American office, but they are state procedures. “I do not comment on US decisions,” he said.

To make this request, the Office of Foreign Assets Control says a lawyer should not be involved.

There is no effective imprisonment for those involved in corruption

In the 13 years since Kosovo’s declaration of independence, prosecutors have filed 298 indictments against 216 politicians – the vast majority of them for corruption offenses.

There are 55 cases in this group of politicians, in which high-profile state officials have been charged, but none of them has been sentenced to effective imprisonment by a final verdict.REL 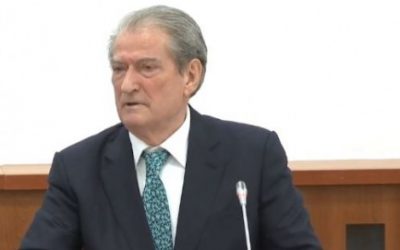