Considered in isolation, some of the Biden administration’s recent decisions on sanctions and transatlantic diplomacy may seem highly appropriate. But above all, including Biden’s next European tour is the pursuit of a united Western policy to deal with an increasingly aggressive China.

Joe Biden is set to embark on his first trip to Europe as US president. Following a G7 summit in England, he will attend a NATO summit in Belgium and then a bilateral meeting with Russian President Vladimir Putin in Geneva.

But while Europe will serve as the meeting place, the focus will ultimately be on China, because Biden’s strategic priority is to foster a united Western response to Chinese behavior.

China’s growing assertiveness and contempt for Europe has irritated the views of many European leaders on the regime of President Xi Jinping, creating an opportunity that Biden must not miss. Strange as it may sound, the Nord Stream 2 gas pipeline connecting Germany to Russia is now at the center of Biden’s efforts to push Europe, especially Germany away from China.

For years, Biden ridiculed Nord Stream 2 as a “bad deal for Europe,” arguing that it endangered the security of the continent, and especially that of Poland, Ukraine and the Baltic states.

At his confirmation hearings in January, US Secretary of State Antony Blinken said the next administration was “determined to do everything we can to prevent” the pipeline from being completed.

But U.S. efforts to halt Nord Stream 2 could have dealt a deadly blow to the transatlantic alliance as German Chancellor Angela Merkel’s government views Russian gas as Germany’s road coal-removal station. Suddenly, the United States last month lifted sanctions against the company that is building the pipeline.

Since then, German Foreign Minister Heiko Maas has spoken of “the really great relationship we have established with the Biden administration.”

To be sure, one of the biggest winners, for now, is Putin. With Nord Stream 2 sending Russian gas directly to Germany via the Baltic Sea, the Kremlin will be able to cut off supplies to transit countries like Ukraine.

But while there can be no denying that Ukraine’s security, finances and even independence have been called into question, the Biden administration was wise to admit that it could not stop the pipeline. He therefore decided to use the acceptance of the project to gain more cooperation from Germany in US policy towards China.

For its part, China sees Europe as more decadent and sclerotic than the US, and has been amassing abuses on the continent, even issuing individual sanctions against Dutch lawmakers and members of the European Parliament.

In response, the European Parliament has blocked ratification of the draft Comprehensive Investment Agreement (CAI), an agreement the European Commission agreed with China last December, rejecting the Biden administration’s request for a preliminary inquiry into the matter.

China’s assertion has given Germany and the US the encouragement they need to make a deal that will unite the West. The conditions are already clear: Germany will get the pipeline and, ultimately, the climate policy it wants; The US will have Germany’s support in implementing a new China strategy and protecting the rule-based international order.

Looking at the context, then, Biden’s concession to Nord Stream 2 was essentially cost-free. With the Germans determined to complete the project, U.S. opposition would have deepened divisions in the Western alliance.

Unlike former President Donald Trump, by making bombastic deals and close ties, Biden has come to terms with reality and derived material benefits from it. Europeans now most likely will not allow the implementation of the CAI soon.

As for Putin’s Russia, Biden seems convinced that the West has the ability not only to contain it but perhaps even pull it out of China, as well. There is a clear case that increasing dependence on China is not in the interest of Russia’s national security, and this is apparently the message that Biden will convey to Putin in Geneva.

Trump did not think America needed allies in Europe to achieve its economic and political goals. But Biden understands that the transatlantic alliance is a foundation of U.S. economic and national security. That is why he is willing to risk burning Russian economic interests in order to strengthen the West’s position vis-.-Vis China.

Critics such as Eurolintelligence’s Wolfgang Münchau see Biden’s policy as “based on a misjudgment of German policy, which badly warns of the chances of a foreign policy of Biden’s successful administration.”

In fact, anchoring Germany firmly within a united Western front to engage with China could prove to be one of Biden’s key diplomatic achievements.

If nothing else, it is a bold gesture that exorcises Trumpism from US foreign policy. 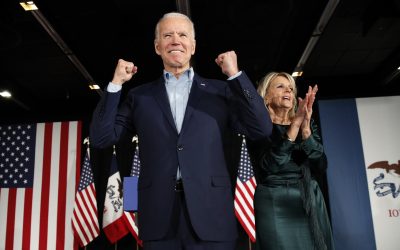