Basha: June 13, a golden opportunity to show Albanians and the world that we are on our feet!

The incumbent chairman of the Democratic Party, Lulzim Basha, during the meetings in the district of Elbasan, considered June 13 as a golden opportunity to show Albanians and the world that the Democrats are on their feet.

“It is the first test after April 25, after the election massacre for our strength that we will show through mass participation in the internal race of June 13”, said Basha.

“Therefore, my call to anyone who may have lost their mind is not to find useless reasons to kick the sacrifice of the Democrats of Cërrik or to destroy what we have built with 4 years of sacrifice. “Let’s put aside personal grudges and resentments”, continued the leader of the Democrats.

Therefore, on April 25, not just an unequal race was held, not even the election massacre is the biggest tragedy that happened to the country, but it is the fall of democracy and the temporary cessation of the will of the Albanians for change. Democracy means respecting the will of the majority. Most Albanians wanted change on April 25, they love it even more today, most of them decided to follow it as here in Gramsh where the number of votes doubled, despite the election massacre. While some of them were pressured, threatened, intimidated, forced to stay away through mechanisms that have nothing to do with democracy. The fall of democracy on April 25 is not a drama only for the Democrats and the Democratic Party, it is not a drama only for our supporters, but it is a catastrophic act for Albania and the Albanians. Brothers and sisters, we are the political family heirs of the December Movement, we are the political family that overthrew communism and brought democracy, that introduced Albania to the Council of Europe and NATO, that abolished visas and that de facto realized the candidate status for the European Union, that we made the fastest economic development in three decades, that we doubled the salaries of teachers, pensions and salaries in the whole public sector, that we absorbed the biggest strategic investments such as TAP or Devolli.

Every achievement has our stamp and this is no coincidence. No achievements have been made in governing the Socialist Party although we have actually split almost in half, those little more these 30 years of pluralism. And this is no coincidence. It can not be coincidence, it can be coincidence the first time, the second time, the third time. This is the product of two completely different mindsets. We are united because we were born as a force to serve the people.

So I am very happy that during this race that has taken me from the south to the north and today to your bay and I will continue again tomorrow in the north, I have seen how the mood of the Democrats has been transformed. Man when he goes through moments of shock like April 25, like March 31, 1991, goes through several stages, disbelief, despair, disappointment, shock, anger, which I have seen especially last week sparkle from your eyes Democrats and not only for and then determination to not accept injustice and to do it all together to get revenge to the neat and neat are the Albanians who deserve and will definitely have the change for which they voted on April 25th.

Therefore, I am here today to ask you to use June 13 as a golden opportunity to show Albanians and the world that we are standing, that we are and remain the only political family of values. It is the first test after April 25, after the electoral massacre for our strength that we will show through mass participation in the internal race of June 13th.

As it has its advantages, this race, which differentiates us from the opponent who has not done it for years, even if they make elections in their own party, has its own disadvantages. The main disadvantage is that the risk of surrendering to someone who sees April 25 as a victory for Edi Rama and not as an election massacre could give birth to a new rift between us. Therefore, my appeal to anyone who may have lost their mind is not to find in vain reasons to kick the sacrifice of the Democrats of Cërrik or to ruin what we have built with 4 years of sacrifice. Let alone personal grudges and resentments.

Therefore, my invitation is one and only one: we have an opponent, the fierce enemy of democracy, the fierce enemy of Albania and Albanians. This is our battle, but in this battle from June 13 I am sure as I saw with my own eyes from Saranda to Tropoja the base is united and I will come out united, so I ask you to make your individual decisions on June 13 with a clear political conscience, to decide to come out of this battle united, to decide to continue the mission with which our fellow citizens have charged us, that there is no force in Cërrik, Elbasan, Albania or the world next to confront and overthrow this regime besides you, besides us, besides the Democratic Party. I urge you to vote to continue this battle to the end and I ask you to give me the confidence to lead this battle to the end 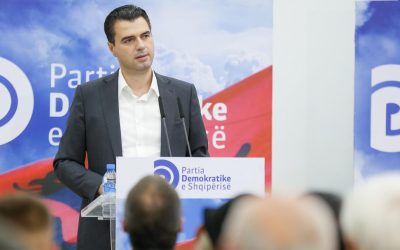