The exhibition of the painter from Shkodra, Fatmir Juka, opens in Tuz

On June 5, 2021, at QKI “Malësia”, in Tuz, the famous painter from Shkodra Fatmir Juka, was presented to the public of Tuzi-Malësia, with the exhibition “Xhubleta Entropia”. 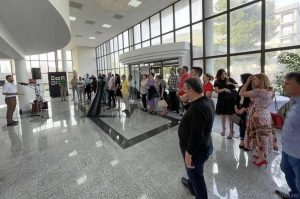 The exhibition is complete with contemporary elements, and inspired by Albanian ethnography.

The opening of this exhibition, at QKI “Malësia” in Tuz, was attended by art lovers who appreciated the works of the artist, and the opening was made by the Secretary of the Secretariat of Local Self-Government of the Municipality of Tuz, Marina Ujkaj.

Critic Jozo Kocovic spoke about the exhibition, emphasizing that the exhibition of paintings by painter Fatmir Juka is an authentic artistic product of its kind.

“I say this because it presents a detailed research of the jubilee and its treatment in the artistic context, as a detailed analysis of its constituent elements. Such as stitches, lines, images, which represent elements of national identity, especially the mountainous one, over the course of the centuries. In his paintings there are details such as the grandmother, the crowns, the burden of the trees, the talisman, the fish, the water waves, the crab, etc., which, analyzed in the context, archaeological, historical, ethnological and cultural, reflect traces and arguments of being “Reproduced over the canvases over the centuries, with an artistic care and sensitivity as a product of the author’s deep impression with the object he treats”, stressed Kocovi..

While the author of the exhibition, painter Juka, further spoke about the importance of this exhibition, which will be open to the public until June 13.

Regarding the exhibition in question, Mr. Juka for the portal Malesia.org states:

“The installation of the illuminated jubilee that stands at the entrance of the center for culture is somewhat the image of a moving figure, in step. With this possibility of travel, this exhibition took the road to the Municipality of Tuzi in QKI “Malesia”. In fact, the journey of this exhibition started from the shore in the city of Ulcinj before the pandemic, but it kept pace like everything in the world and today it came and stopped here. From a conversation with my colleague Jozo Koçaj a year ago, from which he suggested that I should open it here in Tuz because she used to come to her house…. Surprised I can freely say that indeed this funeral was found in his home, but I was also involved by the sincere attention, interest and kindness of the hosts and respectively the organizers that I want to mention with great respect respectively, Mrs. Marina Ujkaj, Secretary of the Secretariat for Local Self-Government in the Municipality of Tuzi, Albert Camaj, Cultural Advisor in the Municipality of Tuzi and all the technical staff who help me with the successful realization of this activity. This is definitely a positive trace of a cooperation which speaks from the top for a healthy path of mutual cooperation to continue with long and intensity “, stressed Juka.