Durrës / Basha: Democrats do not accept the election massacre

The leader of the Democratic Party, Lulzim Basha on Saturday stated that the democrats of Durrës district do not accept the electoral massacre and the fall of democracy.

In a note on the social network Facebook, Basha writes that the Democrats, all of them, are united and ready to complete the mission they have taken on their shoulders.

According to him, the Democrats will defend democracy and bring a better future for Albania and Albanians.

“The democrats of the Durrës region do not accept the electoral massacre, they do not accept the fall of democracy. We are united and ready to carry out the mission we have taken on our shoulders. “We will defend democracy and bring a better future for Albania and Albanians.” said Basha.

Good to see you ladies and gentlemen, brothers and sisters, greetings from the bottom of my heart, with a deep gratitude to each of you here in this hall for hundreds, to thousands of Democrats of the Durrës branch, for the extraordinary battle, for the sacrifices, for the self-sacrifice , for the tireless work you have done during the battle of April 25th. For the political leaders of this battle, for our candidates for MP, for the leaders of the Democratic Party, the chairmen of the group sections, the members of the presidency, the leaders of the Youth Forum of the Democratic Party, and the representative of the FRPD, the Democratic Women’s League , all the activists of our campaign who in Durrës not only achieved the electorally set objectives, but exceeded them despite the extraordinary electoral massacre.

A reason which does not weigh and is not the fault of any of you here in this hall, neither of the democrats of Durrës nor of the citizens of Durrës. So, I’m glad to be here today though not in the circumstances in which we all would have liked to be together today as I look you straight in the eye after weeks of shock, disappointment and shock, now with high heads, with the same anger but I also believe and I am convinced with the determination to turn the injustice of April 25, faced by the people of Durrës and all Albanians, into an energy to be together, side by side in the continuation of the battle and in the completion of the mission that we have taken on our shoulders, on your shoulders, in front of all the citizens of Durrës and in front of all Albanians.

Because, brothers and sisters, April 25 had nothing to do with democracy, just like on the distant March 31, 1991, these were elections without a solution. And this is because of the state becoming one with the party and the party becoming one with the state. This is due to organized crime, introduced in every cell of the state and activated and reactivated for the second time in Durrës. In Durrës, 339, which still holds hostage the negotiations and Albania’s path to the European Union. This is due to the cruelty, vileness, recklessness of an opponent who has no respect for pluralism and considers the political opponent as an enemy. I know the sacrifice of each of you here in this room. I know that not just a political campaign has been poured on you, which would be normal even for a ruling party, but the barbaric revenge of someone who does not love and has never accepted the rules of pluralism. The barbaric revenge of those who have become one with this criminal attempt to maintain the power of the minority, overcoming the will of the majority.

Because April 25, just like in ’91, did not face two sides. On the one hand, not the Socialist Party, because it is not the socialists of Durrës who appointed Ilir Ndraxhi, Jurgen Çyrben, Rrahman Rrajen and Lefter Koka with friends in the list of candidates, as we know very well the socialists of Durrës and we their opponents. We were not facing a party, even if it is in power, but a state put in the service of a political-oligarchic-criminal gang. And on the other hand we had the Democratic Party just like in ’91, without any instrument of power, except for the greatest power that God forgives us, which is the power of the pure hearts of democrats, it is the moral power, it is the power of our intentions. right, is the power of our vision, of our program for Albania, for the Albanians, for Durrës and for the people of Durrës.
With these instruments the parties in this battle came down on the one hand a regime compromised in the marrow of the crime, with criminal on the side, with the people of the files. On the other hand, our team with experienced people, with resistance fighters, with intellectuals, with representatives of our legal and parliamentary battles, with experienced people of resistance over the years, the one with the open bag like never before, neither in 2001 nor in 2005 of the massacred budget of the money of the Albanians, which last week was flooded with earthquake victims who without any transparency and not based on fair estimates, were offered 89 times more money in exchange for the vote in 5 days the end of the campaign than the 15 months that left them in the lurch. Legalizations for votes, illegal constructions for votes, hashish for votes, employment and abductions for votes.
Brothers and sisters, something very serious happened on April 25th. The last and only instrument left for the restoration of legitimacy and democracy in the country has been destroyed. A minority of corrupt people, united with a minority of criminals, have superimposed on the will of the vast majority of Albanians who wanted change on April 25th.

That is why they followed you like never before. That is why they followed us all over Albania like never before. How is it possible that in the conditions of an electoral massacre and a state united with the party and including justice, how is it possible in the conditions when it has been spent several times more than in 2017, the Democratic Party to come out of this battle more big? Numerically bigger, bigger with mandates and above all bigger morally, the answer in my conviction lies in two factors: the first factor is the factor that in this battle we came out with values. We respond with anti-values ​​and the model of anti-values ​​that nowhere in Albania is deeper and more visible than in Durrës, in the Durrës of citizenship. The second factor is because despite the grievances or disagreements that are normal in any political family, you Democrats of Durres for days to put them aside and unite and continue side by side the battle in the interest of Albanian citizens. These are the two main factors why the massacre not only did not break us, but made us stronger and because after April 25 the edge of the opponent does not laugh, because he is aware of the massacre, of the crime he has committed. He is aware that he has not brought any solution, he has not answered any questions before April 25.

Therefore, it has returned to maneuvers, two of which stand out. The first, the trick, the trick of reaching out for alleged unconditional cooperation without red lines and white papers. Now there are no Albanians who do not recognize cunning and deception as the two main features of Edi Rama. But why do it right now? Because he knows the strength with which we came out of this battle. Because I know that even ordinary Durrës citizens, even ordinary Albanians, are leaving room for shock and shock to their friend and in this way they want to soften and possibly eliminate the battle that awaits them. And this can be achieved by making us members of the massacre, members of the thieves, members of the electoral crimes and such we will become if we accept the co-government if we catch the outstretched hand of the thief of the will of the Albanians on April 25. Two clear and concise answers to two questions that are asked and repeated. The chairman of the Democratic Party does not recognize the April 25 elections as legitimate and representative of the will of the Albanians. The chairman of the Democratic Party disgustingly rejects the cooperation with the perpetrator of this massacre and I invite all Albanians to join us in the only way that a civilized society has, and in particular a society that has set out for the European destination. Let us not accept the fall of democracy, let us not accept the overlapping of the will of the minority over the minority over the will of the majority, but let us fight in all forms and ways until the return of legitimacy, democracy and through them change for Albania and Albanians. 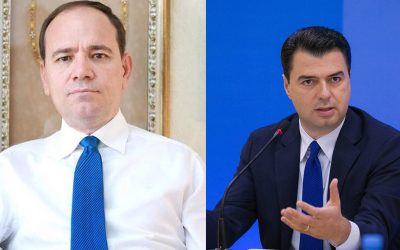