The UK drug regulator says it has approved the Covid-19 vaccine developed by Pfizer and BioNtech for use in 12- to 15-year-olds, following similar authorizations in the United States and Europe.

The regulator announced that it is up to the Joint Vaccination and Immunization Commission to decide now whether to give the green light and accept the injection for this age group.

Children aged 12-15 have received the Pfizer vaccine in the United States, while France and Germany are planning to launch immunizations for that age group this month.

The Department of Health and Welfare in Britain has announced that it will provide an upgrade after the commission makes a decision. The chief executive of Britain’s drug regulatory body, June Raine, said in a statement that the agency had reviewed in detail the clinical trials for children aged 12-15.

“We have concluded that the Pfizer vaccine is safe and effective for this age group and the benefits outweigh the potential risks,” she said.

However, giving vaccines to children in rich countries while the rest of the world suffers from a lack of doses for the most vulnerable people has raised concerns.

The World Health Organization has called on rich countries to donate doses to COVAX, instead of vaccinating children. 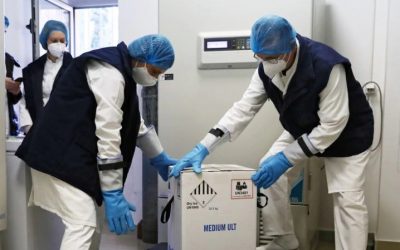