Basha talks about early elections: To dismantle the Rama-Doshi regime

The incumbent chairman of the Democratic Party, Lulzim Basha, says that April 25 “did not solve anything” for Albanians, and for him, neither democracy nor Albania “can wait until 2025”, thus implying the third governing mandate. of Prime Minister Edi Rama can not be complete.

With this logic, Basha said that as the opposition, “we will use every instrument to restore democracy and fair elections.”

“Who else but us has the strength to bring this battle to an end? But so far we have not come by chance, we have not come crawling. Our strength has been increasing precisely because of the sacrifices and battles we have waged.

Therefore, with this responsibility that no one other than us can take, with this force rediscovered through our unification and the unification of the Albanians on April 25, I have come to ask you to continue the battle, just as I have come to ask you to give me the belief to continue to lead the battle with a goal, not four years, but an hour ago after the closing of this race which gives it even more value and shows us in the eyes of Albanians what kind of family we are.

Family debate, race, participation, free thought and after the end the only guarantee and the only striking force to overthrow the regime. There is only one way to this, that of mass popular mobilization, that of the clarity of our political positions and our goal in one can be nothing but to leave no minute of peace, no minute of oxygen for this regime, but to do everything in every forum together until we overthrow it and return to the Albanians the conditions for free and fair elections “, said Basha.

Speaking at a meeting with Democrats in Lushnja, Basha called it a task at a historic moment for the DP “to organize and lead the vast majority of Albanians who wanted change on April 25 and love it even more today.”

Basha stressed that every instrument for early elections will already be used, when he said that “every means should be used, to engage in every form, in every internal and external forum, to take on every responsibility from the earliest time. as soon as possible to dismantle the Rama-Doshi regime with companies, because their names do not end if we take them one by one and lead the country as soon as possible towards the elections that will bring solutions ”.

It is also our duty not to fall into the trap or the insidious and cynical game of those who consider obsolete, outdated our attitude towards the criminalization of politics, which in fact is the only instrument of the opponent for 8 years.

Just as we must contemptuously reject the overthrow of the values ​​that intentionally or unintentionally show those who steal elections call him a success and the thief a successful man.

We have never had this model. We have absolutely had our mistakes, both in government and in opposition. But this has never been our model, this is not my model, this is not my vision and I am convinced that it is not the vision of any of you here in the hall, of any democrat and democrat, Lushnja and Albanian.

And if those who waged the total war against democracy using all possible instruments of party-state, oligarchy, organized crime to destroy elections for us is imperative to be now in total war using already every instrument to return democracy and fair elections in the country.

Therefore, as far as I am concerned, the reason, motive and objective that I bring before you to ask for your trust is one and only one: to use every means, to engage in every form, in every internal and external forum, to we take on every responsibility that in the shortest possible time to dismantle the Rama-Doshi regime with companies, because their names do not end if we take them one by one and lead the country as soon as possible towards the elections that will bring solutions “. 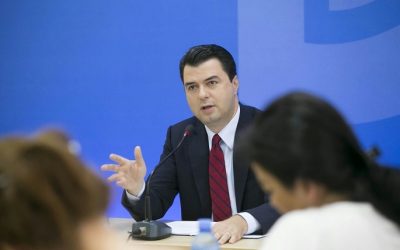