Russian artist, who at the beginning of his career tried to build art based on pure colors and form. After abandoning his career in the social sciences, Kandinsky forever revolutionized the art world./Konica.al 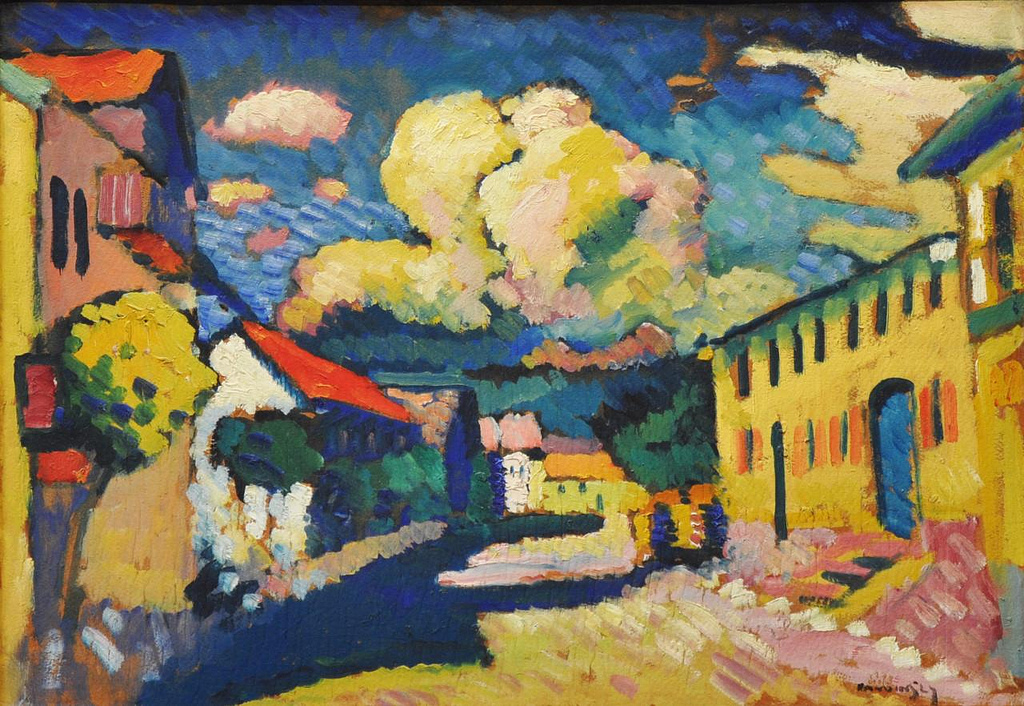 Vasily Kandinski was the first painter to base his painting on purely pictorial means of expression. Thus he abandoned the use of “objects” in his paintings, preceding the abstractionist movement. Kandisnki was a multifaceted artist: he was not only a painter, but also a sculptor and writer, which made him regarded worldwide as one of the creators of pure abstraction in modern painting. After successful avant-garde exhibitions, he founded the group “Der Blaue Reiter” (Blue Knight, 1911-14) in Munich and began to paint entirely in the abstract. Forms evolved from the first fluid and organic paintings, to geometric and recently pictorial paintings. The painter was molded with a cultural heritage partly European and partly Asian, with Muscovite mother and father of Siberian origin. His family loved to travel, so as a child he discovered Venice, Rome, Florence, the Caucasus and the Crimean peninsula. The mother had a musical inclination, while the father worked as a tea merchant. His parents divorced when Kandinsky was about 5 years old, so the boy moved to Odessa (Ukraine) to live with his aunt, where he learned to play the piano and cello in elementary school, and also studied drawing with a teacher. private. He had an intimate experience with art since childhood. Childhood works reveal very specific color combinations, impregnated with the premise: “each color lives its own mysterious life”. The young man continued to have unusual feelings about color as he stared at the vibrant architecture of the city and the collections of icons. The interest in the slightly wild and unrealistic styles of Russian folk painting never faded. He received his doctorate in social sciences in 1893. At first, he resisted the artistic trend, considering art as “a forbidden luxury for a Russian”, but finally, after a period of teaching at the university, he accepted the post of director of the photographic section at a printing house in Moscow. Two events led to the sudden change of his career in 1896: the first, when he attended an exhibition of French Impressionists in Moscow, and the second, when he heard Wagner at the Bolshoi Theater. Thus, Kandinsky’s life and career took a new turn, from which he never backed down. 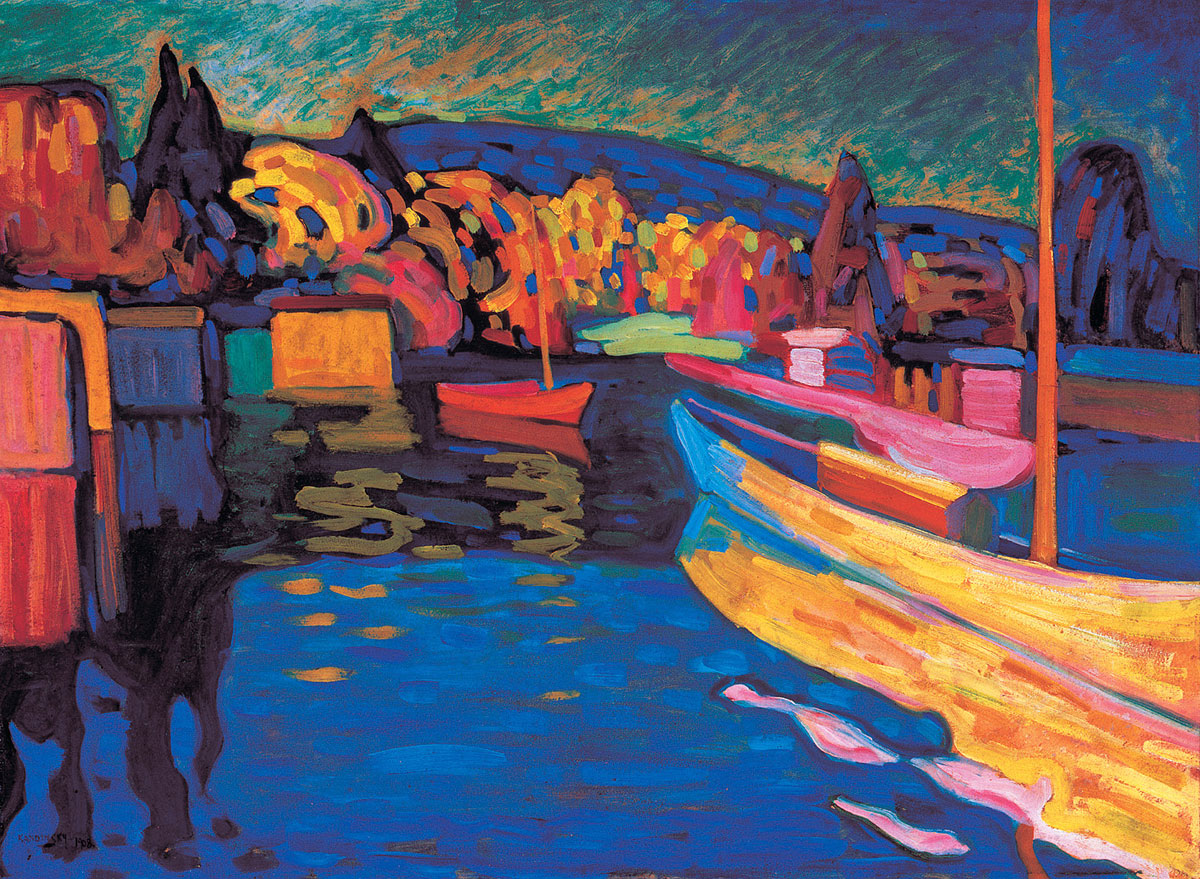 In 1896, as he approached his 30s, Kandinsky gave up his legal career and decided to move to Munich. He had no problem with language, as he had learned it from his grandmother from his mother during childhood. He enrolled at the Munich Academy of Arts, but was largely self-taught. Kandinsky stated that Claude Monet’s work was one of his greatest influences. In Mona’s paintings, the subject plays a secondary role compared to color. It was as if reality and fairy tales intertwined. This was the secret of Kandinsky’s early work, which was based on folk art and remained so even when the paintings became more complex. Between 1902 and 1907, the artist remained a wanderer, visiting a number of countries such as France, the Netherlands, Tunisia, Italy and Russia, to settle permanently in Murnau. During his travels, he painted a series of alpine landscapes (between 1908-1910). Famous work “Mali Blu”Belongs to this period, which clearly describes the panoramic view of nature through colors. Unlike other painters of the era, the use of color in canvas was extremely different. The color palette served more to express emotions than to give a description of nature or subject. The year 1910 was crucial for Kandinsky and art in general, as that year revolutionized the art scene with the production of the first abstract watercolor. It also published the treaty “Spirituality in art ” in the “Blue Knight” Calendar, in addition to promoting abstract art and autonomous use of color. Until then, color was in the service of purely utilitarian painting, ie it served as a complement to represent an object, a landscape, etc., but Kandinski paved the way and shared this utilitarian use to give color an autonomy. total. Upon his return to Russia, he immersed himself in Russian cultural policy and contributed to art education and museum reform (1918-1921). Organized twenty-two museums and directed the Museum of Painting Culture. In 1920, he was appointed professor at Moscow University. Somewhat sidelined, he devoted most of his time to transmitting artistic knowledge. For teaching, the artist followed a program based on the analysis of shapes and colors. In 1921, Kandinsky founded the Academy of Arts and Sciences and became vice president. However, very soon the Soviet attitude towards art changed, the ideas and expressionist vision of his art were rejected by the radical members of the Institute. Kandinsky was judged by colleagues to be “very special” and, as a result, he decided to leave Russia to move to Germany. As he experimented with the use of colors, over time the paintings would undergo further changes. In 1933, when the Bauhaus was closed by the Nazis, the painter moved to France. Most of the paintings of that period stood out for original color compositions, sometimes mixing sand with paint to give it a soft rural texture. It is worth mentioning that the paintings from the Parisian period have wonderful colors, full of novelty and attractive sensations./Konica.al

“The work of art is born from the artist, in a mysterious and secret way. From him, she takes life and lives. “Its existence is not due to chance and insignificance, it possesses a definite and determined force, similar to its material and spiritual life”, – says Kandinski.

In July 1937, accompanied by other contemporary artists, he exhibited his work at the “Degenerate Art” exhibition in Munich. The exhibition attracted many art lovers, but 57 of his works were confiscated by the Nazis. The master of colors and abstraction died of cerebrovascular disease in Neuilly-sur-Seine, France, on December 13, 1944. However, he remains immortal through extraordinary paintings, even continues to be much admired for paintings, but also as the creator of abstract art. He invented a language of abstract forms, with which he replaced the forms of nature. Wanting to reflect the universe in his visionary world, he thought that painting had the same power as music, consequently the lines and colors had to correspond to the vibrations of the human soul.

The pioneer of abstract art, he is not only Russian, he is above all an international artist who lived for some time in Paris, traveled to Europe and became famous through the essay “Spirituality in Art” (1911). The artist marked a crucial turning point in the birth of abstraction, creating a new language that expresses “his inner nature” and that requires musicality. At a time when surrealism was at the forefront of the Parisian art scene, Kandinsky broke away from strict geometric art to pour into a kind of poetic lyricism. From the moment he settled in Paris, the painter seems more redeemed. In his paintings we find nature-inspired forms, organic and biomorphic, that occasionally evoke works by Joan Miros or Jean Arp./Konica.al