Triumphs Quartararo, consolidates the leader of the ranking

He started first and finished the same. French driver Fabio Quartararo with official Yamaha today won the Italian Grand Prix at the Moto GP, held at the Mugello track.

He started the race from first place and finished it at the top dominating him all the time. This is the third success of the season for the Quartararo, which consolidates the leader of the ranking.

The second was closed by the Portuguese Miguel Oliveira with KTM, followed by the Suzuki Spaniard, Joan Mir. Anyway, Mir and Oliveira exchanged places on the podium (the Spaniard was ranked second), after the Portuguese was penalized, for crossing the runway limits in the last lap.

Check out the full results from Mugello 👇@ FabioQ20 takes his third victory of 2021 ahead of @ _moliveira88 and @JoanMirOfficial@oakley | #ItalianGP 🇮🇹 pic.twitter.com/n3p2wQSsGU

A race to forget this for the Ducati engine, which performed poorly with its pilots, where Bagnaia crashed, as did Marc Marquez with Honda. Only tenth Valentino Rossi with Yamaha Petronas, racing on the track of his home.

That one was for you Jason ❤️ 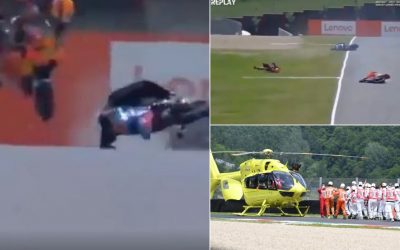