In an interview with Radio Free Europe, the Head of the Department for Operations and Training in the Kosovo Security Force, Colonel Ejup Makedonci, says that the exercise “Defender Europe 2021” is of great importance for the KSF.

Colonel Makedonci also says that the KSF is gradually increasing its combat capabilities for the protection of the territory of Kosovo.

Radio Free Europe: Defender Europe 2021, is the largest military exercise in Europe since World War II. What training is it specifically about?

Ejup Macedonci: Defender Europe 21 is a US-led exercise for Europe and Africa designed to rank interoperability and operational preparedness between the United States, Partner countries and NATO allies. s.

In Kosovo, the exercise “Defender 21” is focused on the western area of ​​our country, ie in the region of Gjakova, more precisely, the high command of the exercise and the exercise directorate, were located at Gjakova Airport, while the field exercises from KSF infantry company, were developed in the Babaj region of Boka, in the municipality of Gjakova.

Radio Free Europe: How did the KSF get involved in these exercises?

We have used this exercise for two main aspects: the first for the validation of infantry capacities, therefore, the KSF in these exercises validates its first infantry capacities at company level. And we have also taken the opportunity to make our country, for the first time, a host country, of such a large-scale exercise.

Radio Free Europe: What is the significance of the US Army’s validation of infantry units?

Radio Free Europe: Can it be said that with this exercise, the US will show that Kosovo remains within its sphere of influence?

Ejup Macedonci: Yes, of course! From the United States of America, Kosovo has been treated and is treated as a country close in strategic terms, with the interests and goals of the United States of America, to preserve Western values ​​in this area. So, Kosovo has been invited to all the exercises that have taken place so far for a long time, in different European countries, where the US military organizes and directs those exercises. In this case, it is an increased reassessment of the US, towards Kosovo, enabling Kosovo to host a part of the “Defender 21” exercise on its territory.

Radio Free Europe: Of the 27 participating countries, Kosovo is one of the 16 host countries where for the first time in Kosovo American troops landed outside the KFOR mission. What does this mean for Kosovo? 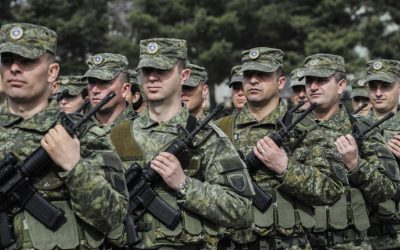