After nine years of effort, Chelsea returns to the top of Europe, winning the Champions League for the second time. The London Blues won 1-0 against Manchester City, which in the first final failed to triumph. Coach Tuchel lost the final years with PSG, but triumphs this year.

City had a clear chance in the eighth minute. Sterling gets a great pass from Ederson and comes out alone in front of Mendy, but the Bluve goalkeeper deflects the ball into the corner kick. Chelsea then squandered two clean sheets with Timo Werner.

The Sitizens could have taken the lead in the 27th minute. Foden received a pass in the area and when it looked like he would score smoothly, Rudiger came to the rescue. While Chelsea lost Thiago Silva, who due to a withdrawal was forced to leave the place Christensen.

Chelsa unlocked the final in the 43rd minute with Havertz. The German star easily avoided Ederson and sent the ball into the net with the gate empty. Perfect finalization of a perfect action. After 3 extra minutes, the Blues close the first half 1-0.

In the middle of the second half, City loses captain De Bruyne after a clash with Rudiger, with the latter being penalized with a yellow card. The Belgian’s eye darkens and Jesus enters in his place. A few minutes later the Sitizens ask for the penalty, but they are not right.

In the 73rd minute, Pulisic loses a golden opportunity for Chelsea. Guardiola introduces Agueron instead of Sterling, totally in the shadows. In the 90 ‘Foden loses the golden opportunity to equalize. 7 extra minutes are given, but City can not equalize, Chelsea is declared European champion. 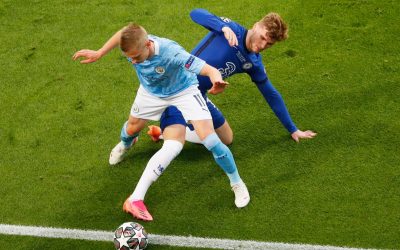