Merkel has given authoritarian leaders “a winning card”

Vladimir Putin and Alexander Lukashenko are not natural twin souls of the soul. The Russian president finds his autocratic counterpart in Belarus a deliberate ally. What unites the two leaders is a determination to retain power despite the cost through relentless repression of political opposition.

They also share the same perception of the west in general and Europe in particular. As much as Western democracies can inflate around respecting international rules and norms, they are fundamentally weak.

Flagrant violations of international law can sometimes push the EU into action. But the sanctions undoubtedly stick to the real economic pain that would change the Kremlin’s cost-benefit analysis. And revenge can turn into a goal.

Putin’s nationalism throws Russia as forever under the threat of Western aggression. Sanctions come into play. This is the calculation that informed the annexation of Crimea by Russia and the occupation of its territory in eastern Ukraine. She encourages Moscow in its support for Bashar al-Assad in Syria, in the assassination of opponents of the regime living abroad and the arrest of Alexei Navalny in the country.

He also encourages Russian interference in Western elections and Kremlin-led cyberattacks. It is a comfortable bet that Lukashenko shared the presumption of impunity when he ordered the hijacking of a Ryanair passenger plane in order to abduct dissident journalist Roman Protasevich.

In the evidence of Europe’s response so far, he was probably right. The EU’s response to this flagrant air piracy has been to advise airlines to avoid excessive flights to Belarus and to stop the state carrier Belavia from European airports.

The EU will never find it easy to reach an agreement on sanctions. Its 27 members have different interests and histories. Germany, Italy and France pay close attention to economic opportunities in Russia. For Poland and the Baltic states, security is paramount.

Germany’s Angela Merkel, however, has also given the autocrats a winning letter. Few can match Merkel in her rhetorical commitment to the rule-based international system.

Outini wants a return to the spheres of influence of the politics of the great power. Undoubtedly, the German chancellor is sincere in her conviction. Germany has made great strides in multilateralism. And yet. She is almost always the voice of caution when the conversation turns to enforcing the rules.

In part, this may have to do with time. She arrived in office very soon after the US had gone to war in Afghanistan. There is also temperament. Like much of a centrist attitude, it can mix moderation and fluctuations.

That said, Merkel takes her role as a champion for German industry seriously. Foreign policy must be carefully calibrated to avoid undermining the country’s legendary export performance. Thus Berlin took the lead in postponing the recent EU investment deal with China, despite Beijing’s growing contempt for international rules.

Closer to home, the other EU member Hungary has become a major manufacturing hub for the German car industry. Its prime minister, Viktor Orban, is leading the country towards authoritarianism. Merkel has consistently used the EU ban to support Hungarian democracy.

With Russia, the test for Merkel is the pipeline under the Baltic to bring Russian gas to Germany. Nord Stream 2 is nearing completion. It immediately promises to lower the EU’s common energy policy, provide strategic economic security for the Kremlin, and weaken Ukraine.

The exclusion of the project would indicate a serious intention on the part of the West to support a law-based order. This would also impose significant costs on German businesses. Ignoring the pleas of the US and many European governments to stop, Merkel is setting a clear boundary for Europe’s response to the Kremlin illegality.

Putin can do as he pleases knowing that the EU response will be limited by Berlin. Sanctions can be prevented, but they will not be harmed. Merkel can not complain if others see her as an ally of the autocrats. 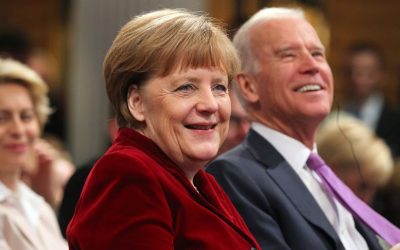