VOA: In addition to the invitation to Meta, Ambassador Kim had requested that …

In Tirana, the military exercise “Defender 21” held today an Open Day in the Albanian capital after a series of professional activities in almost the entire territory of the country.

The ceremony was attended by the highest authorities of the Albanian state and the US Ambassador to Albania, Yuri Kim.

It is learned that Ambassador Kim had requested that the President of the Republic Ilir Meta and the Chairman of the Democratic Party, Lulzim Basha be invited to today’s ceremony.

Mr. Basha was not present at the ceremony, while President Meta attended and delivered a greeting speech.

The US Ambassador to Albania, Yuri Kim, said that the “Defender 21” Exercise and this Open Day are an excellent opportunity for all to see the close Albanian-American cooperation, which was established many decades ago. and is being further strengthened today and for the future.

“The USA has a real and brave friend in Albania, it has in it the strongest and truest ally. Defender 21 opens a great and important perspective for the Albanian-American cooperation. The United States has always stood by Albania in its pursuit of freedom, independence and democracy. We are side by side – today, tomorrow and always “ – said Ambassador Kim.

President Meta thanked the United States for its assistance and support to Albania on its Atlantic path, as well as for the fact that they chose Albania as a host country, for the development of this very important exercise.

“As a NATO member, we feel appreciated for this fact. “NATO is the greatest alliance of freedom and the trust of the Albanian people and the support for it is unanimous, as well as our European vocation.” – said Mr. Meta.

Prime Minister Edi Rama also spoke at the Defender 21 Open Day ceremony in Tirana, praising the skills and commitment of Albanian and American troops in fulfilling their defense and security tasks.

The confidence that the US has consistently shown in this partnership and in this great strategic alliance with small Albania culminates with this military exercise, “Defender Europe 21”, which is not by chance the largest exercise, with the most involvement significant that has ever happened in the history of our region “ – said Mr. Rama.

“Defender Europe 21” is the largest military exercise in the Balkan region since World War II, the most important within NATO, which is taking place in 7 different military bases in Albania.

More than 28,000 troops from 26 countries are taking part in the exercise. Albania has a key role in this exercise as a host and training country, making available several air, naval and ground military bases. / Voa / 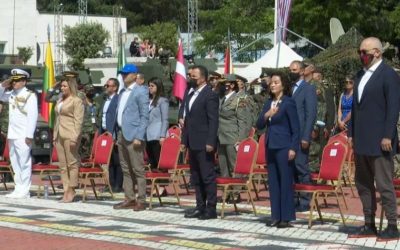